SONY EREADER FOR SALE IN CANADA 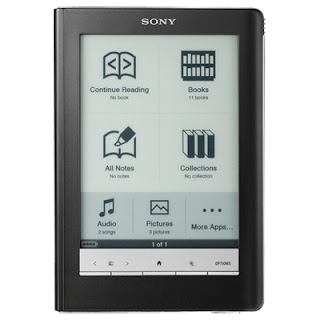 YOU KNOW YOU WANT ONE.

AVAILABLE AT FUTURESHOP OR SONY STORES OR SOME ONLINE WEBSITES.

yeah. But does it read .cbr and .cbz files? If not, for $399, screw it. It's not that difficult to add such functionality.

and none of the ads mention that it has support for external memory cards. What kind? Apparently it has two slots. For SD cards? Or is one SD and the other Memory stick duo crap. dunno. But at least there are ereaders finally being sold in Canada, even if they're from Sony and don't support what I want (or at least don't advertise well enough what they do support)
From the deranged mind of reedsolomon.matr1x at gmail.com at 1:06 p.m.