Today I am going to rant about the radio. This has been bugging me for a while. 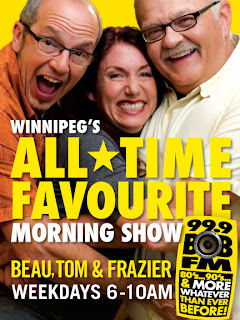 First BOB FM brought over Beau and Tom from Q-94 FM because nobody was listening to Q-94 FM anymore cause it was shit. Fine, I'm not up that early all that often anyways, and old people need something to rant at in the morning while relieving their bladders of prune juice anyways. But now whenever I come home from work I see THIS FUCKING BILLBOARD telling me that they've RUINED BOB FM FOREVER. They have added a woman to their morning show. The kiss of death. I guess there weren't enough people in the shrill female sidekick demographic listening to Bob FM in the mornings. I bet it has the opposite effect though. Guess what BOB FM. YOU GOT GREEDY. You can't win everybody. By trying to do so you alienate everybody. You had a niche, you served that niche. Ask yourselves, why did Q-94 FM fail in the first place? CAUSE OF SHIT LIKE THIS. Curve FM is still pretty much crap but at least its not complete shit like Q-94FM was or like Bob FM now is. Why? Because it serves its niche. People don't want to hear a womans voice in the morning laughing at shitty jokes read off the internet. I DO NOT WANT TO HEAR THAT. So I won't. Theres 20 other radio stations in this shitty city. Don't take me for granted.

Secondly, how is it Winnipeg's all time favourite radio show? Nevermind favourite radio show of the last year, no, if Bob FM is going to LIE, they're going to LIE LIKE NOBODY HAS EVER LIED BEFORE. Beau Tom and Frazier is Winnipeg's favourite morning show across all of time and space and infinity and beyond. Why not. How can you even prove such garbage? What the fuck is the CRTC doing allowing this sort of bullshit to happen?

Frazier. I remember you. I remember Q-94 fucking stupid billboards. Oh yes, I remember. Back with a vengence. God help us all. You're a third wheel.

Why do women always have to ruin everything?

Fuck you CHUM broadcasting. FUCK YOU. If I kept a list, you'd be on it.

If you wish to contact the Canadian Broadcast Standards Council about this attack on Winnipeg listeners of Bob FM, you can call toll free 1-866-696-4718, visit www.cbsc.ca, or write to:

I will personally refuse to purchase anything advertised on Bob FM until this situation is rectified. Take note of that, Winnipeg advertisers.
From the deranged mind of reedsolomon.matr1x at gmail.com at 8:13 p.m.