Okay, in Winnipeg and a few other cities Canada Post has unveiled shitty new Canada Post mailbox wraps that look like graffiti... To ward off graffiti. (whole picture available in link)

Fucking imbeciles! There was nothing wrong with the boxes before. They were red, people generally didn't tag them that often, or if they did, Canada post took care of it before I ever noticed.

But now they look tacky and shitty. Will this procedure cost more than it would have to just repaint it occasionally in the first place, or like any government expenditure, does it cost more than the problem they're solving. I'd guess the latter. 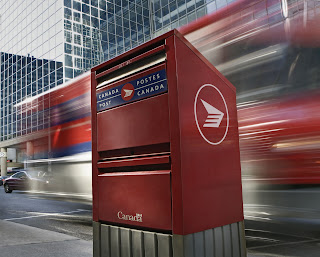 THIS IS HOW A MAILBOX SHOULD LOOK IN CANADA. Or at least, like those old classical rounder shaped ones. Not like a pre-grafittied/tagged piece of SHIT.

Also Canada Post provides some images on their website, but only allows them to be used without permission by accredited news agencies. Guess what, fuckers, I'm not accredited but I'm using it anyways because accredited news agencies are fucking press release regurgitators and nothing else. Fuck them and their bullshit terms of services. My taxes pay for your bullshit, so you can let me use it in a legitimate setting such as this. 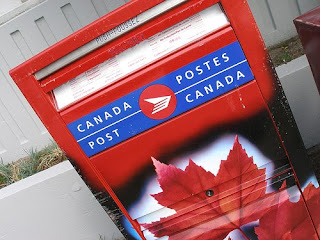 This one isn't so bad. Never seen it personally, though.
From the deranged mind of reedsolomon.matr1x at gmail.com at 1:12 p.m.