Why would anyone buy a laptop tray with a cup holder?  I know! Let's put a liquid next to my expensive multipurpose machine!  What could possibly go wrong?

Jysk sells a good laptop tray.  I recommend it.

From the deranged mind of reedsolomon.matr1x at gmail.com at 9:58 a.m.

Sometimes I wonder if the New York Yankees are more popular in this town than the Winnipeg Jets..  not really, but I hate the Yankees so it bugs me.

On a similar vein, if you had to guess the Winnipeg Jets colours based on flags left on vehicles you'd have to say purple and grey.  Those flags don't last at all.

From the deranged mind of reedsolomon.matr1x at gmail.com at 6:10 p.m. 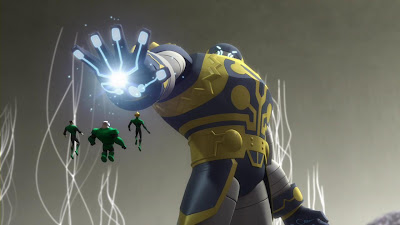 "Can we watch new episodes of DC Nation on Cartoon Network now?"  "NO!"

Recently, The Cartoon Network has started up in Canada as a "class B" digital channel.  It was launched July 4th, so about 3 months ago.  It's only available on Bell TV, Cogeco, Eastlink, and Telus Optik TV.   So if you live in Winnipeg like me, it's not available unless you have Bell satellite TV.  The channel is 50% owned by Astral Media, and 50% by Corus Entertainment.  If you go to the cartoonnetwork.com website, you're shunted without any apology to the Canadian website.  Which is annoying if you want to see something pertaining to the American channel.  But this article isn't really about Cartoon Network Canada.  It's about Cartoon Network. 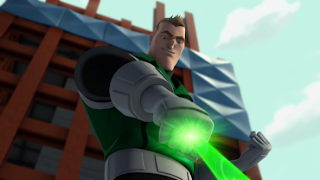 On Saturday October 13th 2012, Cartoon Network canceled the airing of the fairly popular DC Nation block.  The DC Nation block of programming generally consists of the cartoons "Young Justice", and "Green Lantern: The Animated Series", along with two DC Comics short cartoons.  Cartoon Network did not explain why they did this, and they did this after Green Lantern:TAS received a favorable article about it in USA Today about the supposed to be aired episode about a Green Lantern in a steampunk universe.  Many people were excited.  Worse than that, the previous episode showed the main character, Hal Jordan, supposedly killed by the Anti-Monitor, a threat to the universe.  Young Justice also ended the previous week on a cliff-hanger, and one of the animated shorts that was supposed to air in the block was supposed to be aimed at young girls, a magical girl character named Amethyst of Gemworld, which held a lot of promise as a concept itself. 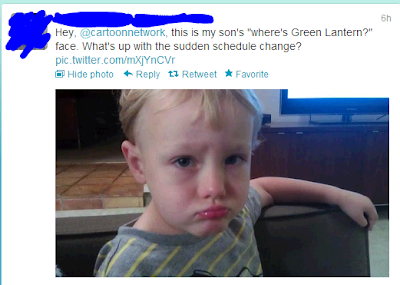 Fans were justifiably angry, and turned to Twitter, Facebook, Tumblr, and 4Chan to express their rage.   Images of crying children wondering why they would do this.  Eventually, Cartoon Network issued the following statement:  "Hey #DCNation fans! Have you heard?? DC Nation will return in January with all new episodes!" No, they haven't heard, because that PR Blurb was the first they heard of it.

4Chan seemed especially furious, even for 4Chan.  Vigilante justice levels of anger were displayed.  Twitter and Tumblr and Facebook fans were angry, but still mostly rational. 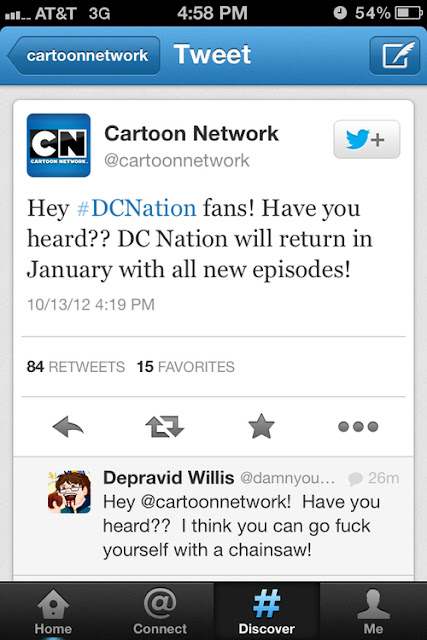 Mostly.  In any case, online petitions were made, Facebook comments sections were flooded, and it doesn't seem as if this will die down any time soon.  To add insult to injury, they replaced Sundays airing of DC Nation with Canada's own Johnny Test, the poster boy for the abolishment of cancon requirements. 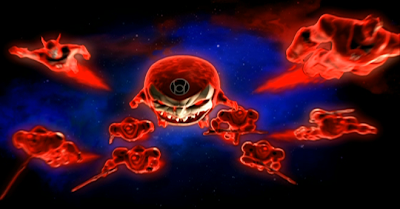 Green Lantern and Young Justice don't really have much of a toy line, so some people are speculating that is the reason for the hiatus.  Others are saying they want to give a boost to "How to train your dragon"  airing in the timeslot that DC Nation had, right before the popular new Teenage Mutant Ninja Turtles on the very same channel.  Who knows.  My nephew doesn't watch the show (yet, I'll probably get him the DVD's) but he loves the Green Lantern toys he got from McDonald's.  The poor toy sales from the generally considered poorly done Green Lantern movie is the rumored reason they haven't produced any toys for the animated series.  A shame, as the animated series is much better than the movie, and produced by Bruce Timm who did the classic Batman animated series .  Even if it got poor ratings, which I doubt, WB (Who owns Cartoon Network) should keep it going as a loss leader to popularize the franchise for future movie box office numbers.  Did Avengers numbers come out of nowhere?  Spider-Man?  No, Marvel built up an audience with popular cartoons for years before doing live action.  Disney has pushed them even further, and Disney/Marvel's marketing is light years ahead of WB/DC's. 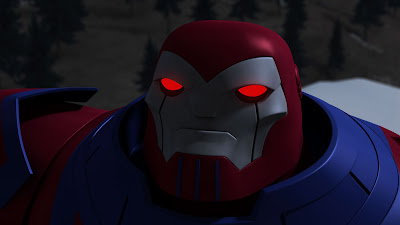 Cartoon Network have shown themselves to be a 2-bit operation.  If they do indeed have a desire to cancel DC Nation, they should have done so after giving at least a week of notice, and allowed this week to air.  They would have avoided ending the shows on a cliffhanger, and further angering fans by not telling them until the last minute.  People would have been angry, but it's a different kind of angry when someone puts a steak in front of you and then quickly yanks it away and instead gives you dog food.  If the Cartoon Network does desire to cancel this block, they should communicate this to their parent Time-Warner, and to DC Entertainment, who would probably be better off airing their shows on a network like the CW. 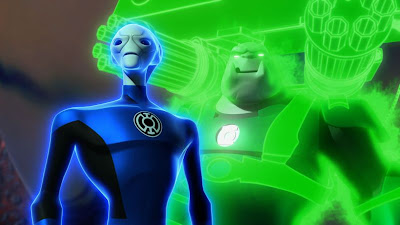 Does this bode well for people thinking of subscribing to the Canadian version of this specialty channel, currently on free previews on a select few providers?  No, it's horrible PR.   Even though the Canadian channel is still way behind on airing the shows, the bad PR for the American station affects the Canadian one.   The people paying to run this network in Canada should be angry.   Advertisers should be angry.  The idea that even the producers of these shows were shocked and confused on twitter brought the anger to yet another plateau.  This whole scenario should be cataloged for future reference as an example of how not to act.

Apparently it's the 20th Anniversary of Cartoon Network.  They are celebrating their 20th birthday by angering their fans, by making children cry, and by shooting themselves in the foot for the future.   Happy Birthday, Cartoon Network.  I was a jerk when I was 20 too.

** Update **  Young Justice and Green Lantern seem to be available through iTunes.  Who ever thought there'd be a day I'd be praising Apple.  Alas, no DC Nation shorts available there.

** Update 3 ** some people are still having success with iTunes still, so try your luck.  Show might be on Amazon some time this week as well, if you don't iTunes. 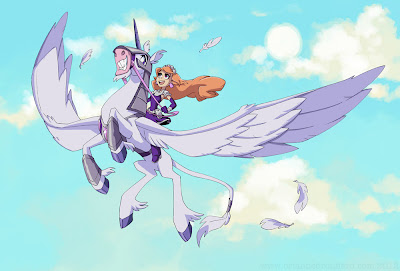 Because I figure I can't just post Green Lantern images.


Please feel free to republish the text of this article in whole or in part.  I release it as public domain.
From the deranged mind of reedsolomon.matr1x at gmail.com at 1:50 a.m.