Labels: acme, baggu, gay, nylon, plastic bag ban, plastic bags, shopping bags
Recently there have been a lot of news articles with thoughts towards the banning of plastic bags. There is a lot of misinformation out there with regards to bags apparently choking bambi in the forest and attacking babies and killing fish in the ocean somehow. So the in vogue thing right now, is to recycle and reuse bags rather than take bags from the store.

I do sympathize with the ideal, that is to say, I think its better to reuse shopping bags than constantly get and throw out plastic bags. Plastic Bags are made out of Natural Gas, using.. the process of Alchemy I guess, I'm no expert, and really, the price of Natural Gas is high enough.

But thats not really the point of my blog post. My post is about the utter crap that stores offer as replacements. If you go into any store, Safeway or IGA, whatever, they usually have something like a "Green Bag" which is a square shaped bag with a huge loop. Often Green in colour. Who would carry something like that around with them? Why can't they make bags that look like the plastic bags that exist? So that you don't look gay*.

Why do these bags make you look gay? Because they're shaped like an overlarge purse or handbag. It's all well and good if you're female, recycle away. But has nobody any sympathy for the environmentally conscious male? Or is it assumed that any male with an environmental sympathy must be gay? Probably. I find it interesting that recycleable bags are predominantly marketed towards women. Maybe Women do a majority of a households shopping, and command the most attention and sympathy from marketing and design forces.

The point of this article is that, at least here at home, the major parties, even the conservatives for some reason, want to ban plastic shopping bags here in Manitoba. With NO regard for how gay it will make people look. Which is fine if you're gay. But if you're not gay, its rather annoying.

Still, as always, the internet does offer solutions. I did a search, or a few different searches, to find bags that resemble bags that exist. 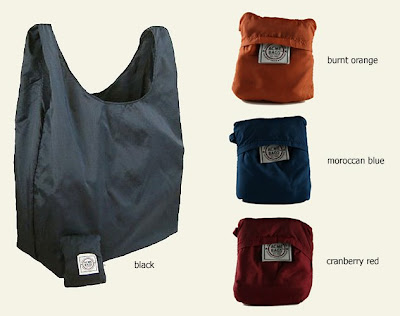 Acme Bags offers this "Workhorse style" reusable bag. It is made of Nylon, which I always thought was an oil based synthetic, and probably is because my thoughts are usually right. Anyways it folds up into a small little thing, so It's easy to carry, and doesn't look overly gay in black. Looks almost like a large lunch sack or something. Anyways, It's one option thats out there, but again, the point is they don't sell stuff like this in stores. They sell the big stupid looking types of bags. If you want to replace plastic bags, you should replace them with something visually the same. Anyways they have a video on their site. Check it out. One interesting thing is they tell you to watch for cheap imitations and knockoffs. how do we really know that acme bags doesn't produce cheap immitations and knockoffs? Those statements always amuse me.

It does make sense to me to eliminate the current plastic bags we use with biodegradable bags. But it's not just about bags, its about the entire environmental footprint. Why do people throw their food leftovers into the garbage rather than compost? Why do people waste paper, plastic, etc?

It's interesting to me how the cola industry moved to plastic rather than glass bottles. I assume it keeps the price down, but imagine if they tried to sell beer in plastic bottles.

Anyways, back to bags. There was one other shopping bag that looked somewhat non-stupid. Baggu offers bags, but unlike the acme bags product, they seem to have been created by women and primarily target the female demographic. But they seem to appear like regular plastic bags, so.. Yeah.

Still, plastic bags shouldn't be eliminated entirely. What if you buy meat? Do you want meat juice leaking all over the place? Of course not.


* - All definitions of the word Gay are in play. No Offense..
From the deranged mind of reedsolomon.matr1x at gmail.com at 1:25 p.m.