lawyersweekly.ca is in favour of new copyright law. And why wouldn't they be? They stand to make millions suing ordinary Canadians for doing what should not be made illegal.

From the Article:
"According to Sookman, the government had three choices with respect to Canada’s copyright regime. First, it could leave things as they were, which he said would not be appropriate in light of today’s digital environment. Second, it could accept that the market has no chance, and allow widespread copying, which could ultimately lead to the implementation of schemes such as that proposed recently by Canadian songwriters for an additional monthly fee on subscribers’ Internet bill to cover downloading. This, said Sookman, would destroy business models such as iTunes and drive business out of Canada. Finally, the government could reform the law in order to create a “favourable legal environment” that creates incentives for businesses to invest in Canada. According to Sookman, the proposed changes reflect this third approach."

Yes, it would destroy some business models, but not iTunes. That's ridiculous. Does Tap Water destroy the bottled water business?

Incentives for businesses to invest in Canada? More like disincentives for businesses to create in Canada. Want to write a game for a gameboy, but nintendo won't let you bypass its DRM? WELL TOUGH LUCK, CANADIAN COMPANY. Because reverse engineering for commercial purposes is also illegal with digital rights management. Want to run a DVD under Linux? Well you can't, even if it was legally reverse engineered and ridiculously simple to do so. DRM, in other words digital restriction monopolies, restrict what you can do. Everybody can be sued.

Ask yourself, Canadians. Do you really want to side with a bunch of outdated American coke snorting music executives, hollywood whores, the Bush government, and idiots who can't read? I doubt it. Just say no to Bill C-61.

Pathetic.
From the deranged mind of reedsolomon.matr1x at gmail.com at 12:07 a.m.

THE GREATEST BAND EVER!

From the deranged mind of reedsolomon.matr1x at gmail.com at 12:26 a.m.

Labels: the happening not happening.

The following conversation takes place between 4:31am and 4:39am CST June 13th 2008. No names have been changed to protect the innocent. Steven is an Australian. So he's up at normal hours.

really PISSED OFF at M Night Shyamalan. The Happening SUCKED!

until last night I loved MNS

I've consistantly and justifiably hated him since sixth sense

No, Signs, 6th Sense, Village and Unbreakable were all great movies!

I'm always right in the end. It's a curse.

anyways did you want something?

dont die of a nightmare or somthin

my nightmare would be in a movie theatre seeing the happening

without a gun to shoot myself

cause they know theyre in teh movie

now get the fuck out

From the deranged mind of reedsolomon.matr1x at gmail.com at 4:40 a.m.

Today the Conservative Party of Canada, through Jim Prentice introduced a "MADE IN CANADA" approach to Copyright reform for this DIGITAL AGE THAT WE LIVE IN (SCARY! ALL THOSE ONES AND ZEROES!) Of course, "MADE IN CANADA" is frequently emphasized, and thus any person with intelligence greater than a brainless hamster would be able to immediately deduce that it is ANYTHING BUT. This law is painfully and obviously made in AMERICA by U.S Copyright interests. The Canadian Public was not involved, except of course if you think being involved is the same thing as coming up with ways to ignore completely. IT IS ACTUALLY WORSE THAN ANYONE THOUGHT IT WOULD BE! The full text of Bill C-61 can be found here.

But lets look closely at what Jim Prentice has secreted from his bowels and is trying to pass off as needed by Canadians:

Today, the Minister of Heritage and I tabled much-needed amendments to the Copyright Act. This fulfills the commitment our government made in the Speech from the Throne to improve the protection of cultural and intellectual property rights in Canada.

Much-needed? That remains to be seen. "Improve" the protection of cultural and intellectual property rights in Canada? Let's find out what's improved.

Consumers will be able to record their favourite TV shows to watch later — known in the industry as time shifting. You will also be able to copy songs you have purchased onto your iPod or cellphone and make backup digital copies of books or photographs. This is commonly known as format shifting.

These exceptions take the form of ANTI-CIRCUMVENTION TECHNOLOGY. You remember those SONY CD'S THAT INSTALLED BACK DOORS INTO YOUR COMPUTER? Well, bypassing those would be illegal. AND subject to a $20,000 fine, not $500 as stated by the government.

Anti-Circumvention technology would make it ILLEGAL to use what you buy how you want to. Want to watch that time-shifted program? Well, if you record a digital program, and the broadcaster enables a "no copying" lock on the broadcast, AS HAS RECENTLY BEEN DONE WITH NBC IN THE USA, then you won't be able to time-shift a program to watch it later. Because honestly, do you think they're going to broadcast something without the circumvention technology? OF COURSE NOT.

The same thing is true for copying a song to your MP3 Player/iPod. If you copy it from a CD that requires you to bypass digital locks, sometimes as easy as holding down the shift key, then you are subject to a $20,000 fine.

If you have an electronic book file that is locked, and are blind, and want to convert it to something your computer can read, you have just become liable for a $20,000 fine.

If you use Linux, and watch a DVD, you have just become liable for a $20,000 fine. Also if you buy a piece of computer hardware and it doesn't work, and you hack it to make it work , you have again subject yourself to heavy fines.

If you buy a Nintendo Gameboy, and hack it in any way that you can play a game you yourself created, you are liable for a $20,000 fine.

If you put up a home video of you singing happy birthday on youtube, you are subject to a $20,000 fine. (Happy birthday is owned by WB)

Hey, remember that TOM CRUISE guy and his SCIENTOLOGY "Religion"? In the united states, they are using these laws to sue ANYONE who uses their "copyright materials" in a critical manner. HOW USEFUL!

Also in the USA PRINTER INK MANUFACTURERS are suing manufacturers who create replacement INK under the DMCA! How is that GOOD FOR THE ECONOMY as Jim Prentice bleats?

There are TONS of examples in the USA of how their DMCA law has done nothing but cause problems for honest hardworking people to use what they purchase the way they want. This is not about "Stealing Music"! This is about controlling the means of production and muddying the waters so much that people will be too scared to produce their own content, because they won't have tons of lawyers backing them up.

Michael Geist has a far better summary of what is being rammed down our throats by these robber barons.

The sad thing is most media companies are COMPLICIT in this act of theivery of your rights and mine. The coverage has been generally lacklustre in the past. Simply parroting out what the industry minister has let out as talking points. The amount of SECRECY involved in this bill is incredibly disturbing. There has been no consultation of the Canadian people. Shame on them.

Oh, and the right to legally back up your Movies and DVD's? NOT YOURS, if you use Anti-Circumvention technology to do it, which almost invariably you WILL NEED TO DO.

But REED you say, I'm an old man, I don't understand any of this stuff! Well, Jim Prentice says you should get a LAWYER. He actually says that. Copyright law is complex, and you will need a lawyer to get through life. He'll have to stand by you all day to make sure you don't infringe on any copyrights accidentally.

Okay old man, heres the gist of it. Imagine you own a car that takes a special sort of gasoline.. If you want to fix your car so that it can get better gas milage, you will be fined for "circumventing" the law. How fair would that be? Not at all. So why do we accept it for Copyright law?

Because Americans are lobbying the government for these laws. It's good business for America. It's bad for Canada.
From the deranged mind of reedsolomon.matr1x at gmail.com at 12:35 p.m. 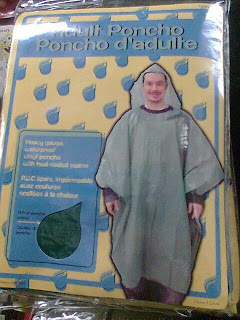 Dollarama is the best.

Wonder what the poncho model was thinking.

"Be the rain poncho" "embody the type of person who is.. Poncho"

Did they pay him in crack cocaine?

Theres something about that face that works.

Congratulations, poncho manufacturing association of China. You have achieved what few others have, you've so successfully advertised your product that nothing you do from now on can ever compare. You're like the Apple Computers of Rain Poncho's. 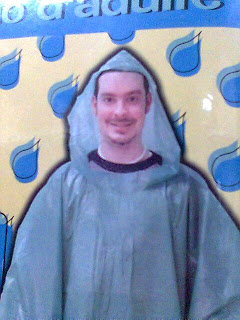 RAIN BEGONE! GIANT DROPLETS OF RAIN! YOU ARE NO MATCH FOR DOLLARAMA PONCHO!
From the deranged mind of reedsolomon.matr1x at gmail.com at 1:51 p.m.