Open the door, get on the floor, everybody walk the Dinosaur 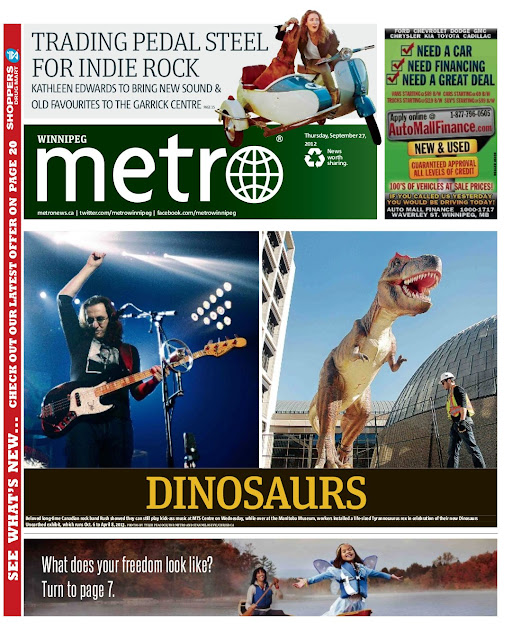 So I grab a copy of Metro Winnipeg today, and here is the cover.  Somebody failed at layout image placement.  I mean, Geddy Lee isn't a young guy anymore, but calling him a dinosaur?  That's a bit cruel. Metro Winnipeg.  Harsh even.

I have to believe it wasn't done on purpose.  I'm not a huge fan of Rush.  I had no interest in going to the concert.  I only own one Rush CD, Test for Echo.  (Which I liked).. but if this really was done in a mean spirited fashion by someone who hates classic rock.. well that would be disappointing.  Spaghetti falling out of your pants disappointing.

I can't wait to take my niece and nephew to the Dinosaur exhibit though.  My nephew is at the right age to have his head explode with Dino-knowledge.

I read an article today about an act of vandalism in Israel against a christian monastery.  The text in Hebrew spray painted on the wall translates to "Jesus is a monkey"

Obviously vandalism is a dick move either way, but I have to wonder if this is a legitimate insult or simply a reference to the "restored" fresco painting in Spain known as ecce homo.  Where Jesus in his new poorly restored visage looks very ape-like.

Maybe not.. but it's an alternate plausible explanation.

From the deranged mind of reedsolomon.matr1x at gmail.com at 11:28 a.m.

Punch in the Face .. book

I think it should be illegal for government funded institutions to require you to use Facebook to participate in something.

Recently the Assiniboine Park Zoo has created a "Name the Panda" contest.  It requires you to log in through Facebook.

Never.  The Red Panda will rename nameless to me forever.

Facebook is an evil company that even tracks  those people who do not use it.

Heads should roll.  Or at least Faces.
From the deranged mind of reedsolomon.matr1x at gmail.com at 1:13 a.m.

It's a moot point, as I've been listening to TSN 1290 or podcasts instead of radio lately.  But it's very unlikely that I'll be listening to 92.1 in the mornings now.  And that's too bad, because it's equally unlikely that I'll listen to Shadoe or Howie in the evenings as Wheeler is such an annoying personality to me I'll avoid any station he's on like the plague.

I'm guessing 92 is going to undergo a format change, and begin anew the same rot that destroyed it in the past.  Hopefully I'm wrong.

What a horrible move.

The only worse move 92 could have made was put perennially stoned sounding Ace Burpee on.

Also when the hell did Hot 103 become Virgin radio? Not that I care, I figured it'd happen sooner or later, but it happened and I didn't even notice.  That's good, I hate 103.  I wish Wheeler and company went there.

It's fascinating to watch this happen to Winnipeg radio.  The people making these decisions can't possibly be living in Winnipeg.
From the deranged mind of reedsolomon.matr1x at gmail.com at 5:51 p.m.

Email ThisBlogThis!Share to TwitterShare to FacebookShare to Pinterest
3 Comments
Awesome geniuses who link to this article

It drives me crazy how the local media continuously asks the same stupid questions over and over again to Winnipeg Jets players.

"How do you like the city?" "It's pretty okay, huh?" "Winnipeg is major league right?  You're cool with us, right?"

I swear it's always CJOB asking these questions, but if they didn't probably someone else would.. Maybe the Free Press.  Stop it.  Just stop it. They signed with Winnipeg, they clearly like what they see.  The first year is over.  They know what we have and what to expect.  Stop asking "Do you like us?  Do you really really like us?"  It's pathetic.

Or nagging Evander Kane.  "So there's some rumours out there, you know, that you, you know, don't like Winnipeg and want to leave and think we suck and hate the local media for asking dumb questions?"  Kane: "I can neither confirm or deny those rumours, that's between my agent and the GM, but I don't hate anyone or anything and definitely would like to get my contract negotiations finished" "So you hate Winnipeg?"  "I never said that" "You heard it, folks, Evander Kane hates Winnipeg and me and my family and wants to be traded to the Toronto Maple Leafs, the team I follow.  I secretly hate the Jets.  Oh wait I said that out loud.. it was a joke.  hahahah.  bye!"

That exchange didn't exactly happen, I'm exaggerating for effect, but it feels like it did. Some of our local media need to either retire or do something not involving sports.
From the deranged mind of reedsolomon.matr1x at gmail.com at 2:58 p.m.

Its not easy being... blue

So I wake up, have a shower, realize all my clothes are dirty except a green shirt.  About to wear it when I realize damn!  Its a bomber game day.  Even worse, its the Saskatchewan roughriders.  Even worse, its the labour day classic.  There is no way in hell I can wear a green shirt today.  Even if the bombers will probably lose regardless, fuck Saskatchewan.  No freakin way.  So I spent the next two hours washing and drying my blue t-shirts.  What else could I do?  Its not easy being blue... but its exponentially better than being green.

From the deranged mind of reedsolomon.matr1x at gmail.com at 1:08 p.m.