Pearl Jam sucks almost as much as Eddie Veder 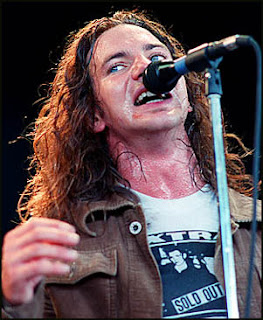 MUMBLING IS NOT SINGING, EDDIE VEDDER !!!

I have XM radio. I question why I continue to pay for it every day. If I want to listen to good 90's/00's songs Lithium is the only channel that plays Smashing Pumpkins, Nirvana, etc. Sure I could just make a mix CD or put that shit on an mp3 player but thats beside the point. The point is this station plays Pearl Jam and/or something involving Eddie Vedder every 5 - 7 songs.

I am fucking serious. I believe they take requests, so some mental institution somewhere with retarded patients must have nothing better to do than request the crappiest music of all time every 5 minutes.

Now I could live with it if I only heard pearl jam once every hour and a half. I hate it, but I can tune out a few minutes because I understand the world is full of people with poor taste and they must be accommodated lest they start running around crazy-like screaming about bee's attacking them in the ear or whatever insane people do. But every 5-7 songs is so ridiculous.

What they should do is make a station called "lithium without fucking bullshit pearl jam". But they don't.

I once worked with a girl who had pearl jam tickets if I let her leave early to catch the show. I hate pearl jam so much I refused to let her go early (also I was lazy and didn't want to be the only one working). They haven't been back to Winnipeg since (a small comfort, at least. The more distance between me and that band the better). I feel bad that I had to do that to her but its not my fault that Pearl Jam is garbage, is it now.

God I hate Pearl Jam.
From the deranged mind of reedsolomon.matr1x at gmail.com at 3:01 p.m.