It's a shame he named his untalented son after himself.
From the deranged mind of reedsolomon.matr1x at gmail.com at 2:11 p.m. 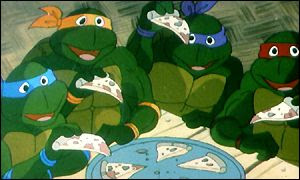 Yes, Pizza Hut is crap, I know every time I eat it, but hey if its good enough for the Ninja Turtles then damnit shutup.

However, have you ever called Pizza Hut after 11PM on a friday or saturday? NO GO. That amazes me, a pizza place that closes before 11 on a FRIDAY NIGHT.

They used to close at like 1AM I'm positive of it. I don't know if they can't find people to deliver pizzas at that time of night, or if they just haven't got any sales past 11PM.. I don't know, but hey, Pizza Hut's loss is Gondola Pizza's gain I guess.

Seriously, closed at 11PM. And don't get me started on the fact they closed the best location in Winnipeg down last month. That's right, the downtown location. Are they going to open one somewhere near downtown? Not bloody likely.

There's not really any Salisbury Houses downtown anymore either. Whats up with that? I mean, theres one I think in that health building, but they probably close at 5 or 6PM.

Winnipeg's downtown, even the places to eat are abandoning it.
From the deranged mind of reedsolomon.matr1x at gmail.com at 11:29 p.m.

Wreck of the everyday periodical.

"Lightfoots demise a lesson for all media" was the headline that popped up on google news.

A lesson they won't learn from.

anyways here's a song to the tune of the wreck of the Edmund Fitzgerald.

The legend lives on from the twitterers on down
Of the big star they call Gordon Lightfoot
The man, it is said, never turns up dead
When the blogs of February turn gloomy.

With a load of bullshit piled higher than a mile
More than the entire internet weighed empty
While the singer its true, had a bone to be chewed
When the obituaries of February came early

Does anyone know where the love of God goes
When the pranks turn the minutes to hours
The google searchers all say they'd have saved time that day
If they'd put in fifteen more minutes to find him.

anyways thats why I'm not a songwriter I get bored easily.
From the deranged mind of reedsolomon.matr1x at gmail.com at 12:30 a.m.

Kevin Eubanks is reported to have left the tonight show to pursue other opportunities. They will probably replace him with a recorded laugh track of his voice and just send the royalties.

God I hate Jay Leno.
From the deranged mind of reedsolomon.matr1x at gmail.com at 11:25 p.m.

I'm not a fan of the olympics. I can stomach the Winter Olympics because there are some sports involved that I actually enjoy watching, but the Olympics in general are a tool for corruption run by aristocracy. I agree in theory with the spirit of the games, but lets be realistic here, the games stopped being about friendly competition and became about winning years ago with Adolf Hitler.

Now Canada has for the duration of the Olympics (foolishly) believed in that ideal despite all of the evidence to the country. A while back, Canadian sports organizations surely figured enough was enough and the "Own The Podium" program began. Spurred on by the fact that Canada didn't want to be embarrassed at an Olympic games it is itself hosting. Nevermind the embarrassment of the opening ceremonies showcasing Quebec, Atlantic Canada, Igloos, Native Canadians, more Igloos, and wheat. WTF was that you ask? That's what you get when you let the Canadian government influence the opening ceremonies. The CBC still reported complaints about the lack of French. They would have reported complaints if the event was 80% in French. Why do they even bother trying to appease Quebec? Theres no point in pushing French on the world. But that's neither here nor there.

The point of this post is Canada has severely underfunded athletes. Own the Podium was an effort to even the playing field and give Canadian athletes a SPORTING CHANCE. Especially against teams like China's who are able to make Curling a permanent vocation on the communist governments dime.

As for the death of a Luger being blamed on lack of practice time.. well, he was 1) killed during practice time, and 2) Canada has given more practice time for competing teams to use the facilities than any other olympic host. We have gone above and beyond. So STFU London.
From the deranged mind of reedsolomon.matr1x at gmail.com at 10:25 a.m.

You know those buttons you push to change the light to cross the street?

Nevermind the fact that they don't work in the first place, I realized today they do not have those buttons in the North End.

What is up with that?
From the deranged mind of reedsolomon.matr1x at gmail.com at 2:20 a.m.

Today we will be discussing the word RETARD.

There is a website called The "R" Word which has the slogan "when you say retard, someone hurts". Which I find to be completely retarded.

In my opinion there is too much attention paid to the feelings of others in this world we live in.
From the deranged mind of reedsolomon.matr1x at gmail.com at 12:57 a.m.