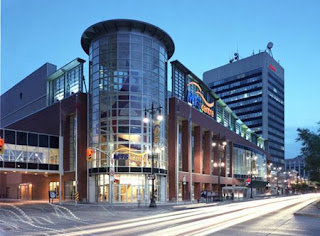 Morley Walker of the Winnipeg Free Press inexplicably keeps using the term "The Phone Booth" to refer to the MTS Centre, the city of Winnipeg's arena. Now, MTS is the provincial telephone company here, and bought the naming rights a number of years back. Here's the thing, NOBODY CALLS IT THAT. NOBODY. The first person to suggest that name was David Asper quoted in the Winnipeg Free Press, and the Winnipeg Free Press has tried to give the impression that people call it that. IT IS A STUPID NICKNAME. NOBODY USES IT. Jesus Christ what is wrong with you, Winnipeg Free Press? Why do you need to propogate this horrid nickname?

Now the article itself was about how the MTS Centre is once again one of the busiest arenas in North America. Which is great, although we still don't have an NHL team so nobody cares. Yeah great the Manitoba Moose are in the second round of the AHL playoffs, and I hope they do well (In fact I hope Vancouver wins the Stanley Cup, and the Moose win the Calder Cup) but seriously, its the AHL. Nobody is going to live or die on the outcome.

As an aside, I wish MTS would just change the company name to Allstream. Allstream Centre sounds better than MTS Centre. Then again I wish they'd switch to GSM and provide better competition to Rogers/Telus than they do, but I digress.

The point is the Winnipeg Free Press is a piece of crap newspaper. It wasn't always so. Look at an issue of the Winnipeg Free Press from 20 years back. There was actual NEWS in there! Go to the Millenium Library and check out the microfiche collection. It will open your eyes as to what real news is and what garbage is currently being sold to you at 4 times the price.*

Nobody calls it the Phone Booth. Nobody. Hell, nobody younger than 25 really knows what a phone booth even is, aside from something Clark Kent uses to conveniently change into Superman. God I hate the Winnipeg Free Press.

* EDIT - One point, the amazing thing is the NDP habit of taking out self-congratulatory ads in the Free Press for doing such a fabulous job is the only thing that hasn't changed. They did it in the 70's, and they're doing it today. The NDP, using your money to make themselves feel better since '73. Because using the money to acutally solve the problems is too hard.
From the deranged mind of reedsolomon.matr1x at gmail.com at 12:09 p.m.