C is for Conspiracy, good enough for me oh conspiracy starts with C

Now I don't know if you're all aware, but in the last federal election the Liberal candidate for my riding was a 9/11 Truther and she came under fire for it. I didn't and would never vote for her, but recently some actual groundbreaking new conspiracy theories have been released.

On an internet web forum, davidicke.com, startling evidence of pre-planned muppet involvement has been blown wide open. Now, it has been known for a long time that Bert, of Bert and Ernie fame (shown in acompanying photo interacting with Osama Bin Laden), is evil, and possibly homosexual, though that's neither here nor there. Now it is discovered that the Cookie Monster was behind 9/11. (click image for larger view) 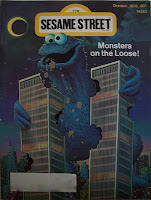 Shown in the scanned photo taken from davidicke.com, Cookie Monster is clearly attacking the World Trade Center. How he has grown to such a height is unknown, but it has been known for years that muppet labs had insta-grow pills of some sort (as shown in one of the muppet movies I think) which are clearly weapons of mass destruction.

Now, as the forum members point out, the terrorist training manual, or "childrens book" as they call it, is produced by CTW. What is CTW backwards? WTC. WORLD TRADE CENTER. So not only is Cookie Monster attacking the world trade center as if it were one of Dad's Oatmeal Cookies or a Vanilla Wafer, he is doing so under the direction of the same oranization.

Now, I know for a fact that various muppet organizations who had offices in the towers were PRE-WARNED the day of the attacks that they should stay home. They were not amongst the many killed in the 9/11 terrorist attacks.

The lyrics of the Sesame Street song are also startlingly disturbing. "Can you tell me how to get - how to get to Sesame Street" .. who would be asking for directions to Sesame Street? Terrorists looking to destroy New York City. "On my way, to where the air is sweet". Yes, until the toxins released from the WTC collapse killed many spectators and firefighters and many others. sweet air indeed.

And there are still more clearly flawless proofs located in the picture. A pentagon shaped cookie with one side destroyed, various illuminati imagery. I can go on and on, but they'll come for me if I reveal anything more.

Now, some people speculate that The Count orchestrated this whole thing so that he could count people jumping out the windows, others say it was Bert who planned it all. Many will say it's a coincidence, another word that starts with C. But in the end, the only truth is that we don't know, and never will know, who did 9/11. All we know is this is part of an even greater muppet conspiracy. One that had Jim Henson in the 90's assasinated with a superbug. Yes, Muppet murder,

I'd like to see Marty Gold of the Great Canadian Talk Show try to disprove this. THE TRUTH MUST BE TOLD.
From the deranged mind of reedsolomon.matr1x at gmail.com at 11:57 a.m.