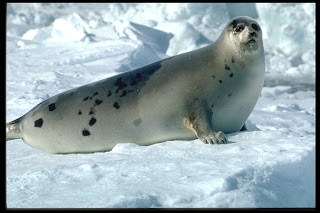 Look at this ugly thing.

So bleeding hearts around the EU and elsewhere want to ban import of seal based products and ban the seal hunt. First, I don't see these same fools doing anything to stop the blatant overfishing of the worlds oceans or making efforts to save animals that aren't photogenic as babies. Second, they won't stop the seal hunt by doing so anyways, and third, the seal hunt is on a scale so inconsequential it is ridiculous how much press this gets in the news.

As a Canadian who supports the seal hunt as long as it is regulated, which it is, I don't see the difference between killing seals and hunting deer or moose or bear. I don't see the EU making hunting illegal (though I could be wrong, this is the EU after all). Nor should they.

I feel as if we should kill twice as many seals for every nation that bans seal products. Just to prove that they're not solving anything. Obviously and maybe sadly it's not a realistic reaction, but all the same, these idiots with their half-assed animal rights beliefs piss me off. Say what you will about the loony vegans out there, at least they're backing up their misguided beliefs with actions, but Peta and the anti-seal hunt brigade are all hypocrites using cute baby seals to appeal to idiots. Why don't they use ugly adult seals in their promotions? Cause they're ugly and nobody cares about them. The seal hunt culls 270,000 seals a year. Peta apparently kills 1/10th that amount of dogs and cats and other "rescued" animals in the same time frame (do a google search for peta kills animals) Life is cruel, but at least the Seal hunt has a practical aspect in terms of providing clothing and sustinence and helping to secure fish stocks.
From the deranged mind of reedsolomon.matr1x at gmail.com at 1:52 p.m.

Hi Reed-you failed to mention the vast amounts of money that are made by the seal hunt protest industry. It earns 10 times as much money protesting the seal hunt as the sealers themselves make.

The Humane Society of United States alone earned 92 millions dollars in 2007. All of this money was not made protesting the seal hunt, but much of it was.

Yes, you are of course correct. It all comes down to scamming money out of the naive. Of course, that's actually the only good argument in favour of discontinuing the seal hunt, it'll dry up the funds of these various organisations. Stop the officially sanctioned seal hunt, instead make it illegal and let the local law enforcement enforce the laws. Leave open a lot of loopholes, price of seal product goes up, voila, everyone who matters wins.