Listening to TSN Radio 1290 (and other local radio stations) 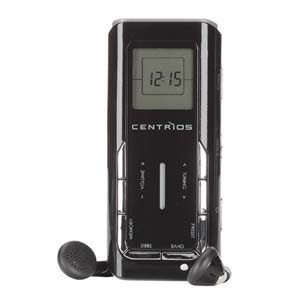 For a while I was content to listen to TSN 1290 in winnipeg using the tunein radio app for android.. but I ultimately wanted a better solution. Ideally it'd be great if cell phones included AM/FM radio and voice recording options, but for some reason the more convergence we get the less there is. Ultimately features are left out because hey, you can use the internet and stream it. And nobody uses AM/FM radio anyways! Though you can usually get FM radio. Supposedly AM doesn't mix well with mp3 decoding somehow. That's what I heard. I don't understand it, nor do I care. Now, sure there are cheap analogue AM/FM radios all over with a dial that you tune to the station you want.. and if that's good enough for you, great. But those ALWAYS break. The dial stops dialing because you dialed it too far, or the volume is no good. I wanted a digital solution. I can press a button, and voila, radio station, and it even says what frequency I'm tuned into on the LCD screen.

Oddly enough I found what I wanted at the source (formerly the source by circuit city but now Bell source). Or maybe it's not so odd considering TSN 1290 and the Source are both owned by Bell. Yes they're one of the most evil companies on the planet next to Monsanto and nestle and shell.. but they have - until December 14 at least - a digital AM/FM pocket radio tuner by Centrios on sale for 24.99+taxes. Regular price is 50 bucks so it's half price right now. The nice thing about it is it is digital. No knob on the side and a clock and digital screen that lights up. I got pretty good reception with it. $25 is a fair price for what you're getting. These devices in this format are really difficult to find.

Seriously its about the size of a pocket digital recorder. Very portable. In fact it'd be nice if they had a recording capability but what can you do.

Takes 2 AAA batteries .. it'd be nice if it took a cell phone battery that recharged with a USB port but beggars can't be choosers.

Lights up in orange on the led screen when you use it. Even has dbbs. Dynamic Bass Boost.

Also has a slot for putting a carrying strap through, and you can even toggle a lock button so you don't accidentally change the station. All in all a good deal for a Christmas present.

It looks exactly like the Coby CX90. Which comes in Silver and Black and has a blue backlight as opposed to the orange of the Centrios. It's probably the same device, and you can get the CX 90 for $10-$20 online, but it's hard to find anyone selling them in Winnipeg and you'll probably have to pay shipping and wait for it to arrive anyways, so if you want something right away, the Centrios is on sale at the source until the 14th of December.

From the deranged mind of reedsolomon.matr1x at gmail.com at 8:30 p.m.