I was looking through Wikipedias list of mascots for various NHL teams. Now that we've got a new NHL team called the Winnipeg Jets, we need a new mascot. Or do we?

Some people want to see the old mascot from the Winnipeg Jets days, Benny, return. I hate benny. Stupidest looking whatchacallit of all time. I hate the name Benny too, and I hate the association with the Elton John song. I think Benny should stay retired. Maybe honour Benny somehow, perhaps retire his mascot number. But he should stay dead. 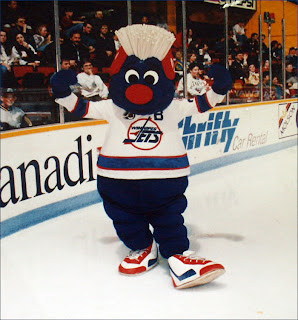 I had earlier mused that perhaps the old Polar Bear mascot of the Winnipeg Thunder basketball team could be used. I always enjoyed his antics. Oddly enough, the person who wore that old costume is now Raptor for the Toronto Raptors. Doubly odd is that the Maple Leafs have a polar bear as a mascot. Who knew! Apparently he's been around for years. Looks pretty lame but whatever. I don't know what Toronto has to do with Polar Bears it's a pretty odd appropriation, but it sort of eliminates the idea of the Jets having a polar bear as a mascot. Plus there are tons of bear mascots already.

Finally theres good old Mick E Moose. He doesn't have an AHL team anymore. He's a decent mascot. Kids know him. Might help to bridge the old with the new. Mick's face always bugged me a bit though. Give him a facelift. Lose that stupid smirk and stupid eyebrows. Also don't moose antlers aren't so yellow. I'd lighten that up too. There don't seem to be any moose mascots in any professional league as far as I can see, so he'd be unique. I don't see anything wrong with going with Mick E. Moose. The "E" can stand for exhaust fumes. Unless he's contractually signed with the Vancouver organization I'd call him up to the Jets. 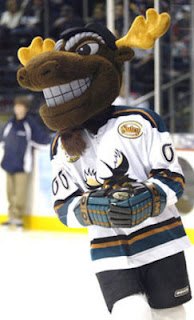 Or they could come up with something totally new. Perhaps a bird similar to thrash, the mascot of the thrashers. We already have two bird mascots for the Blue Bombers CFL team (Buzz and Boomer) so you could either see it as overkill or a nice consistency amongst city mascots.

Whatever the choice, they should give the mascot a flight jacket and aviator goggles and a scarf. Unless the mascot is a transformer that turns from a robot to a jet (which would be pretty cool.. and do-able) Just go full into the whole aviator thing and it'll probably work. 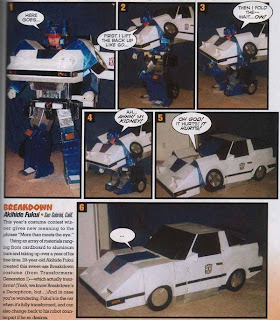 Whatever the case.. I'd kind of like to see them design a robot that transforms into a jet now that I've posted that.. just to see it happen.. but whatever they go with, I hope they don't wait until October to announce it. As far as that goes, they should stick to Mick E Moose as it would be the easiest solution. Just say no to Benny. Nobody liked Benny. Benny is the main reason the original Jets moved to Phoenix. Don't ask me to substantiate that. It's just how it is.

Also I hope they keep the timbits hockey in between periods. They never did it at the NHL Exhibition games but I always thought it was cute. 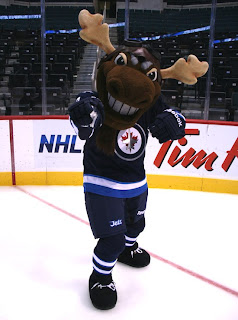 I love the way they said in the press he was called up from the AHL. As if his years of hard work as an AHL mascot gave him the ability to Mascot at an NHL level. Though I did make the same insinuation in my original blog post. They also lightened up the antlers. Looks sharp! Still think he should wear a Jets scarf.. but I suppose it might be overkill or there could be concerns of it falling off or being pulled by kids.
From the deranged mind of reedsolomon.matr1x at gmail.com at 12:25 a.m.

Benny = Benny Haskin. I would be very surprised if they kept Benny as that's a relic from the old ownership.

Do we need a mascot at all? We have Gabe to entertain the fans during breaks. Maybe that's good enough.

I'm not a fan of dancing Gabe. He's getting old anyways.

Don't the Seattle Mariners have a moose?