What are the similarities to the Westminster Dog Show and the Academy awards you ask?

Both always nominate the wost possible winner. For the Westminster Dog Show, its always some goddamn poodle looking monstrosity, and I hate poodles/scottish terriers/yappy dogs. And with the Academy Awards, its always some stupid war movie or something topical that wins best picture.

This is why I don't believe in democracy.

Holy crap, it was a scottish terrier that won best in show. I just checked the website. I CALLED IT. Fucking Goddamn. That and Hurt Locker. Ridiculous. 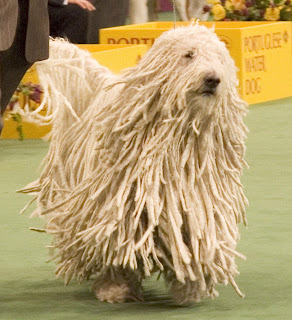 James Cameron might have looked like an asshole whenever the camera was on him, but he deserved that best picture movie, nevermind best director. Not Hurt Locker. Goddamn Sean Penn and Barbara Streisand, the poodle/scottish terrier combo of the Academy of motion pictures.

And don't get me started on the 30 seconds they gave to science and technology in the Oscars. Luddites.
From the deranged mind of reedsolomon.matr1x at gmail.com at 11:30 p.m.