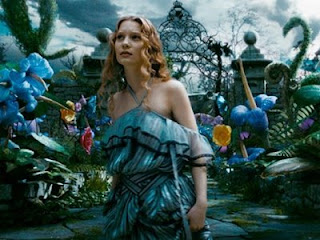 So I went to see Alice in Wonderland tonight, in REAL-D 3D(tm) and here is my review.

The movie takes place 13 years later than the original, and posits the premise that Alice is some sort of big hero and everyone who met her originally is aware of some sort of great warrior type deed that she's supposed to accomplish. Basically its the Never Ending Story but with a girl instead.

The story begins with I dunno, lets say 19 year old Alice being made to go to a party. Now, Tim Burton understands this time period and does a good job of making it fun and original and its all great. Anyways the party turns out to be a setup for some high class sap to propose to her. Obviously Alice being somewhat of an individualist, is unable to commit to this and ends up chasing the rabbit down the hole again. Anyways she suffers from amnesia and believes the episode she had before was just a bad dream (That she kept dreaming over and over again for the next 13 years). Which makes her, upon her return to Wonderland, look stupid for not remembering anything. But thats movie amnesia, who gives a crap about that it doesn't really matter.

Anyways everyone tells her she has to kill the Jabberwocky, and she has to do this and that, and she speaks out in maybe the most apropos line of the script that people should stop telling her what the fuck to do and gtfo. Which resonates with the whole engagement party at the beginning with people trying to get her married off. ANYWAYS, she ends up going through wonderland and re-meeting people from the original story.

Now, certain bits seem to go off on a tangent that makes no sense. The Queen of Hearts has a sister who is the White Queen, which makes no sense really, you'd think she'd be the Queen of Spades or the Queen of Diamonds, I dunno, but I guess he went for a chess or checkers thing which totally made no fucking sense BUT WHATEVER nobody tells Tim Burton when things make no sense or not cause I guess THATS NOT THE POINT. Everyone in Wonderland is a friend of each other, the cheshire cat is good pals with the Mad Hatter, etc etc, unless they're enemies. This bothered me, but its probably something particular to me and who knows. If you can forget the original story and just go with it, then you'll probably enjoy the movie that much more.

The 3D, while it brings you into the world of Alice and Wonderland, wasn't really all that impressively used in my opinion. Then again the last 3D movie I saw was Avatar and maybe it'll take a lot more to impress me now. I probably would have enjoyed the movie just as much in 2D. All you get out of 3D is maybe some things come flying out at you.

Now, Johnny Depp's portrayal of the Mad Hatter wasn't BAD per se, but the visual design was just retarded, as everyone on earth has already seen from the previews and stills from the movie. He talks in a scottish accent, which I neither felt added nor subtracted anything. I mean, I guess it makes sense for a Mad Hatter in those days to perhaps be Scottish, sure why not, but it didn't seem to do anything for me.

While the world was magical and the visuals were stunning, things just seemed to fall into place for Alice and she rarely comes across as an individual, except for the opening and closing scenes where she is NOT in wonderland. Maybe it has to do with the acting settings, maybe in front of a green screen the chemistry and acting just wasn't as good. I might have actually liked if more of the movie was set in the Victorian era or whatever.

Now I'm not an expert on Alice and Wonderland by any means, but I do vaguely remember reading the original book, watching the disney cartoon, and reading through the looking glass. I don't really know how much more Alice actually plays in any other storylines, but nevertheless it wasn't a completely unbelievable story. Certain things took me out of it, but I am a very picky person when it comes to worlds making sense. They don't have to make sense by the rules of OUR world by any means, but at least by the conventions of the original story and this movie they should be consistant. The movie fails in that regard.

Alice's dress doesn't shrink with her, but we sadly get no real nudity. And she ends up wearing strangely rejigged undergarment dresses on the spot.

So in conclusion, I was a bit underimpressed, I thought the 3D would be better done, I thought the movie would be more cohesive, the Mad Hatter character by Johnny Depp was really not that interesting (and they even tried to make him Alice's love interest for some strange reason) and the story was more Neverending story or Land of Oz than Alice in Wonderland, however it wasn't a bad movie, it was visually spectacular, the acting wasn't bad by any means, and though it dragged on at points, I guess kids will like it well enough, though there are points that are questionable for younger children if you're a pussy who thinks kids shouldn't be exposed to scary stuff. oooh look at me I'm a pussy who thinks kids shouldn't hear swear words or see dead people even though kids eat that shit up.
From the deranged mind of reedsolomon.matr1x at gmail.com at 10:52 p.m.