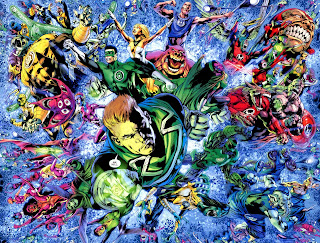 This is for all of those writers out there who are idiots who write blurbs stating who Green Lantern is.

The Green Lantern is the title of a character from DC comics. While he is a superhero in that he's super powered, he is first and foremost a human being with what amounts to an alien weapon. He is not the only Green Lantern, there are 3600 sectors of the universe, of which earth is part of Sector 2814, and he is an officer of the Green Lantern corps. There are more than 3600 active Green Lanterns (currently more than 7200 as there are two Green Lanterns per sector at present)

Green Lanterns are entrusted with a POWER BATTERY, coincidentally shaped like a lantern, and a power ring. The ring is charged by the power battery, which generally holds a power charge for 24 earth hours. The ring is limited only by the imagination and willpower of the bearer, who is able to create physical green hued solid light CONSTRUCTS. Like a boxing glove or really anything. The rings major weakness is fear, which is why Green Lanterns are chosen for their fearlessness, which often borders on recklessness. Fear is represented by the color yellow, and in the comics the character Sinestro eventually forges a yellow ring after he is banished from the Green Lantern corps after it is discovered he used his Green Lantern ring to turn his sector into a fascist dictatorship.

Hal Jordan is the primary Green Lantern of Sector 2814, and will be played by Ryan Reynolds in the upcoming movie. In the comics there are three other major Green Lanterns from Earth. Guy Gardner was originally Hal Jordan's relegated backup should anything happen to him. Both were found equally qualified for the ring at the time of selection. John Stewart was another character also found to have the qualifications to be a Green Lantern, and eventually replaced Hal Jordan when he became disenfranchised with the Green Lantern corps and resigned.

So thats the basics. Here are my top gripes people getting things wrong about Green Lantern.

When people say the ring is "magic". It is not. In fact it is completely non magical, the Guardians of the universe made it one of their original missions to eradicate "magic" from the universe. They encased it inside something called the starheart. Now, there was a Green Lantern who is magic based, and his name is Alan Scott, but he has no connection to the Green Lantern corps aside from being powered by the starheart. Green Lantern rings are scientifically created tools/weapons that are powered by their wielders will. That is all. THE RING IS NOT MAGIC.

"They're called Green Lanterns because they have are powered by a green lantern." This one is debatable, but to me, they've been called Green Lanterns because they wield a green light, and a green halo of power surrounds them when they are powered up. The power battery itself is not technically a lantern, even though it is often shaped like one. It is a conduit to the central power battery on Oa, a receptacle for all of the ambient willpower in the universe.

"Green Lantern is a lesser known character" While Green Lantern hasn't been in the movies, nor has the concept yet been given its own cartoon (aside from a direct to video animated feature last year called Green Lantern first flight, which was pretty decent), It has consistently been one of DC's top comicbook characters. It currently outsells both Batman and Superman, and has done so in the past. Sadly, editorial meddling has kept Green Lantern from achieving the same success as Batman and Superman in the past, plus the characters powers didn't lend itself to live action until the last decade. There is no realistic way of doing it without computer aided help. Let us not forget that Iron Man was not a particularly well known character until his movie came out.

So thats Green Lantern. Learn it well. It just might save your life.
From the deranged mind of reedsolomon.matr1x at gmail.com at 2:13 a.m.