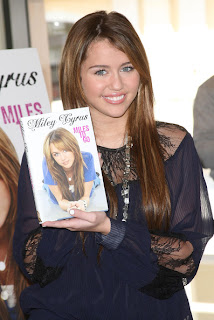 Anyways, The title of her, I assume - autobiography, is Miley Cyrus MILES TO GO. dohohohohoho. Very clever. Good thing she officially changed her name from Destiny Hope Cyrus to Miley Cyrus. Probably just so she could use that title one day. But still, I chuckled.

Do I like Miley Cyrus? Not particularly, her voice grates on me enough to realize that on another girl her accent might have been attractive (probably not). Her music is rather banal and manufactured to me, but all the same its obviously not made for me.. but I don't particularly hate her for anything in particular she can do anything about. I hate her father for inventing/popularizing Achy Breakey Heart and Line Dancing, and for the horrid filmed in Canada TV series "Doc" which was on ALL THE FUCKING TIME in Canada and I HATED IT. Apparently Miley was forced to live in Canada during that period and I suppose we owe her an apology for allowing that horrible horrible TV series to be filmed in Canada in the first place.

In conclusion, here is the greatest music video of all time:

From the deranged mind of reedsolomon.matr1x at gmail.com at 12:35 p.m.

The talent was a measure of weight used for large amounts of coinage (bullion, bulk coin), rather than an individual coin.