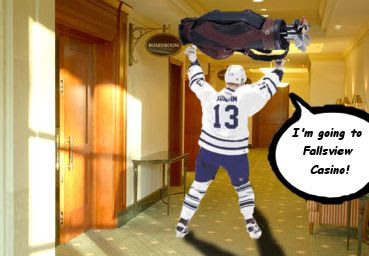 I watch the daily show on an eastern time zone feed on CTV HD on shaw cable. As such, I'm subject to commercials from the Eastern Time Zone.

One of those commercials is for Fallsview Casino, which is probably in or around Niagara falls. The infuriating thing about this commercial is that there are people dressed up as hockey players who have just won the Stanley Cup (or some major game anyways but 'the big game' is alluded to).. these players are excited and the joke in the commercial is that instead of wanting to go to "disneyworld" like many players for sports teams supposedly say, the team is so excited they want to go to Fallsview Casino. Fine. Its a commercial, I can buy that.

What I can't buy is that the colours of the jerseys and the general uniforms are the same colours as those of the Toronto Maple Leafs, the crappiest lamest team supported by the most mindless, retarded fans that ever existed on any continent, planet, nation, moment of time or space, or ever conceived of by any insane mind. The commercial implies that it is POSSIBLE for the leafs to win the Stanley Cup this year, nevermind in any future year. It is not. The leafs will not win. The leafs are 100% Fail.

I will never ever go to Fallsview Casino (even if I end up for some time period in or around Niagara Falls) . I understand that they're trying to target this ad to their target audience of braindead leafs fans of Ontario. The same people who inexplicably vote for the Liberals nationally every election. But nobody should be rewarded for buying into the mass delusion that the Leafs can ever win anything. It's bad enough that Don Cherry's (lets hope its just) senility makes him want to fellate the leafs during coaches corner every Saturday rather than discussing great plays by Ovechkin and Sidney Crosby, it's bad enough the CBC airs the Leafs every week despite the nauseating effect it has on everyone not in or from Ontario, But Fallsview Casino and other advertisers who are of the same mindset, don't perpetuate the myth that the Leafs can win the Stanley Cup. Leafs fans suffer from a severe mental disability, don't enable them.

Also the Ontario Teachers Pension Plan wants to purchase BCE, owners of Bell Expressvu and CTV. Which is somehow bringing everything together into one neat little package. I hate Ontario Teachers, and I hate old people, and I don't really like Bell Expressvu, and CTV airs crappy leafs commercials. And the Ontario Teachers Pension Fund owns the Toronto Maple Leafs. It'l be a shame to lose CTV to them, but presumably that much suck will create a black hole and rid us of all this fail once and for all.
From the deranged mind of reedsolomon.matr1x at gmail.com at 12:10 a.m.

You made some good points .I did a little research on the topic and found that most people agree with your blog. http:/onlineslotsyahoo.com