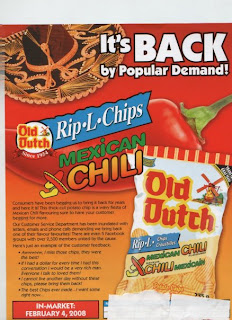 OLD DUTCH'S MEXICAN CHILI POTATO CHIPS! The greatest potato chip of all time. A while back I sent a letter to Old Dutch asking them whatever happened to the greatest potato chip of all time. They said it was discontinued due to lack of popularity. Although in my opinion, they gave up too soon on that flavour. Tons of people I have known have been wistfully remembering the taste of these chips. Heck, there is even a facebook group all for the return of Mexican Chili. I'm very disgusted with myself that I did not know of it until now. Though ironically, I did contact Old Dutch with my request for Mexican Chili chips all the same.

Still, guess what! I found out today that they're back. Old Dutch brought it back (along with au gratin, which is french for cheesy.. which I didn't care for) remembered what they tasted like, EXACTLY. My memory from 15 years ago of the taste of those chips was perfect. The chips are perfection, from the slightly offensive to mexicans lazy guy in a sombrero logo right to the "Mexican chili" taste.. the ripples in the chips make it perfect. Thank you Old Dutch.

Old Dutch must be making a ton of dough on these things, because Mexican Chili is selling out everywhere I go to buy it. Now, I've blogged about my love of Old Dutch Chips before , and my hatred for LAYS (which are GARBAGE) and the fact that 7-11, owned by IDIOTS, only sells Lays, which are shit, which makes me want to shop elsewhere.

Which is sad, as I used to buy mexican chili chips from 7-11 back 15 years ago when they were originally sold.

In any case, Old Dutch bought Humpty Dumpty chips, which means Old Dutch is for sale in Quebec and Ontario. Congratulations Quebec and Ontario. Although Quebecers might be confused as to why Au Gratin is in French. Heck, I never understood why they called it Au Gratin. I guess French just sounds classier. Those Old Dutch people must know what they're doing. Nothing builds up demand for Mexican Chili chips than 15 years of denying it to us.

In any case, as much as I love Mexican Chili chips, and as beautiful as the world is today upon their return to store shelves, THIS GUYS BLOG at http://mindlessdiversions.blogspot.com/ says it far more eloquently. But I basically agree with almost everything he says. 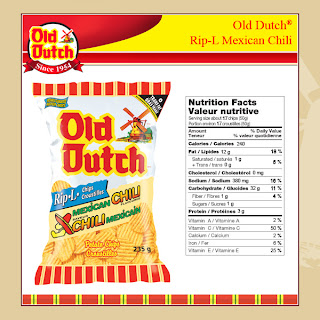 Love that lazy mexican mascot.
From the deranged mind of reedsolomon.matr1x at gmail.com at 11:47 p.m.

Thanks for the shout out buddy. I think you did a fine job of singing the ultimate chip's praises! Great blog.

Well done – it makes a nice change to read something that makes sense. Pleasing on the eye too. You have a real nice site