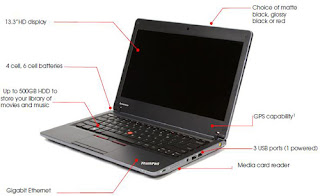 I have a thinkpad. I like my thinkpad. It's the fifth thinkpad I've owned. The first by Lenovo (the others were IBM's). It's not perfect, but its reasonably close. I recently swapped a keyboard after spilling coke on it, and swapped the hard drive for a 500 gb western digital. All without incident and minimal fuss.

I own a netbook. An HP Mini 1000. It is my second netbook. My first was an Acer Aspire One with Linux on it. They were and are useable machines. However, they both have trackpads. I hate trackpads.

All I truly want is a netbook with a trackpoint on it ..instead of a trackpad, ideally, but in addition to, if no other option.

I was super exited to hear a rumour that Lenovo was going to produce a Thinkpad netbook. I'd pay extra for something with a trackpoint on it built with thinkpad quality and style.

Sadly, Lenovo has disappointed me. They were so close, too. I wanted a 10 inch device or smaller. The whole point is that I can carry it around in a satchel or small bag. I don't want a 12 inch device. That's too big.

It comes with an AMD Neo processor. I love AMD. I like the Neo. If it was in a 10 inch device, with a trackpoint, I would be standing in line tomorrow to get one. I could care less if they called it a netbook even. But it is not going to be 10 inches.

I'd even settle for an ideapad netbook with a trackpoint. But that doesn't seem to be happening either.

I know these companies have surveys and shit. How are they not able to make a device that people will pay more for? Why are they failing to provide us with something we want?

Lenovo, please, give thinkpad owners what they want. a 10 inch portable thinkpad with a trackpoint.
From the deranged mind of reedsolomon.matr1x at gmail.com at 12:00 a.m.