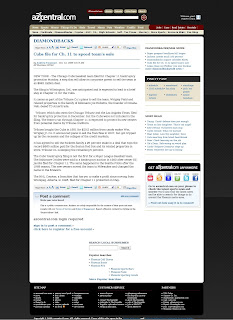 From AzCentral, a Phoenix based news portal:

The NHL Coyotes, a franchise that has yet to make a profit since moving from Winnipeg, Alberta, in 1996, filed for Chapter 11 protection in May.

Ah the joys of being an Albertan. Wheres my prosperity dividend cheque, Ed Stelmach you bastard! I want my Ralphbucks!

Not only do they serve us the indignity of stealing our beloved hockey team the Winnipeg Jets, who still don't make a profit, and probably never will in Phoenix, but they don't even give us the courtesy of remembering where they jacked it from 13 years later.

Took A screenshot on the right in case they change it later. Not that they should, not like anyone in Phoenix would care where we actually are in Canada, all tucked away down there.

From the deranged mind of reedsolomon.matr1x at gmail.com at 10:14 p.m.