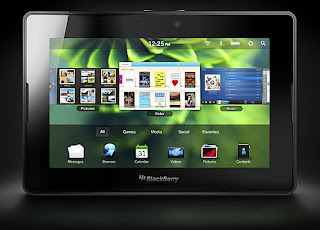 So I bought a blackberry playbook. It was cheap, and I had to send my Android tablet for warranty repair anyways, so what the hell, I thought I'd buy one and give it a try. Also I suppose it was a bit of pity for a Canadian company falling on hard times (though self inflicted, really. I'm not a fan of their phones) I'll give the point of view on the playbook from someone who is primarily an Android user, which I am.

PROS
CONS
So, Blackberry QNX OS 2.0 is out in two days. Supposedly rumoured to be anyways. It brings native Android app support, so that should be interesting to me. If I can get fbreaderj working on this thing, at least my ebook reader desires will be met and that's the most important issue to me.

I just realized, it would be interesting if these tablets had a dummy mode where you could use it as a screen connected to an external device. Maybe watch OTA TV with an external adapter plugged in either via HDMI or composite video/audio in. But this goes for most Android devices too. It'd be useful to have a few extra tablets sitting around just as mini external displays, even when the device becomes obsolete a few years down the line. But this is just as an aside.

In any case, the Playbook has a lot of potential. It'd be perfect just as a Skype video terminal mounted on the wall. Too bad Skype doesn't run on it, or anything else really.

So, here's looking forward to OS 2.0. Warp edition. Coming out on Tuesday. Two days away. It's a good device, with average software trying to run in a pack amongst mostly bad devices running slightly better software.
From the deranged mind of reedsolomon.matr1x at gmail.com at 10:50 a.m.

Quote: Want to lock the orientation to landscape or portrait mode?

Orientation lock is leftmost icon at the top right of the screen. Will you being doing a post OS 2 update?

Thanks for telling me, I did a quick search on google and didn't find anything in the first few results. But really that's a bit non-intuitive. They should have at least put something in the configuration menu under display settings.

Yeah I'll probably give my opinions on Blackberry OS 2 as well. I've got a number of other things to write about but I'll probably get around to it within about a month after its release at the latest.

The PlayBook's user interface is quite polished; this tablet is pretty fun to use. The graphics and overall layout looks sharp and colorful, and it's easy to launch apps, see what's running in the background, and generally move around and get things done.