MILKING THIS TOPIC FOR ALL ITS WORTH 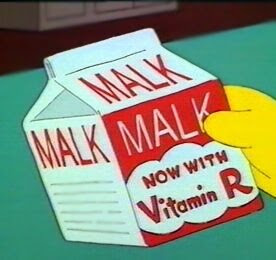 I saw a milk truck the other day, and I got to wondering if the concept of the milk man who delivers milk door to door still exists today. I remember being a kid and witnessing the phenomenon known as milk delivery to a house nearby. And glass bottles too. I love glass bottles. I still don't understand why plastic is used instead of glass. Glass is best.

I also remember when Manitoba had bag milk like Eastern Canada. I never cared for it, but we had to put up with it for a while until the milk jugs came out. I hated how if you didn't drink it quick, the milk would smell like something else in the fridge unless you folded it up or clipped it closed or something. And then there were the times you'd have a leak or a spill. Horrible. I wonder if it was mostly Superstore that had the bag milk.

I opened a 2 Litre milk carton the other day and it had one of those spouts that just would not open without extra effort. It was a bit of an annoyance.

On a visit to the USA once I worried about the effects of bovine growth hormone. I hope we never allow it in Canada.

The worst thing about the milk jugs is that plastic dust when you take off the cap. What is the deal with that crap? Honestly, just bring back classic glass bottles. It's better for the environment.

One of my first memories is of trying to pour myself a glass of milk. I failed, but that said, it was an impressive first attempt. I still fail occasionally.
From the deranged mind of reedsolomon.matr1x at gmail.com at 2:32 a.m.

You must drink a lot of milk.

It isn't plastic dust, it is dried up milk.

They still have milkmen. My office used to get milk delivered once a week. We stopped because they charged more than double what milk costs in the store.