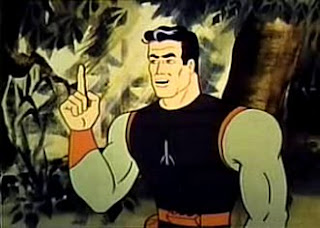 Sure, they changed a lot of things for copyright reasons, but I think its really obvious.

Look at these crazy shenanigans. A cliche mongolian villain who talks like Mojo Jojo.. Lots of villains talked like that back then. Heist a whole planet? That's madness.

Look, the Firefly crew had a priest, Rocket Robin Hood has Friar Tuck. Jayne is clearly Little John with a twist. He likes weapons.. In the cartoon I have embedded, Little John makes a comment about busting heads, and rocket Robin Hood tells him to STFU. Totally how it would go on Firefly. Heck, Jayne has a whole planet of people who think of him as a Robin Hood type folk hero who robs from the rich and gives to the poor. Now imagine how that story would grow to other planets after the events of the movie Serenity? Jayne and Captain Mal Reynolds are probably untouchable in the verse as heroes now. They have their reputation, however unjustly deserved. They have a corrupt government wanting to destroy them.

Its totally Rocket Robin Hood updated without horrible 60's animation. I'll bet if I dug even deeper I'd find even more parallels. Joss Whedon, I'm on to you.
From the deranged mind of reedsolomon.matr1x at gmail.com at 1:47 p.m.