So I can't quantify what EXACTLY made me search out this book, but seek it out I did. I thought it would be more difficult, but there are at least two digital copies of this book online. I assume its been out of copyright since 2004, since copyright should presumably last the life of the author + 70 years and the author died in 1934. Anyways, I downloaded it and read it, and it was quite enjoyable, and a surprising window into the beliefs of the time period it was written in (1905).

Indeed I was first interested in the book from one of the Canada Vignettes commercials that used to air on Canadian TV (I honestly actually sort of miss them...) So it took me what, 20 years to actually seek the book out and read it? Yes it would appear so.

As the vignette states, Flin Flon is the only Canadian city named after a science fiction hero. Vulcan, Alberta is named after a race of science fiction aliens.. kindof. But Flin Flon was an adventurer who explored an "inner world" deep inside of our own and discovered amongst other things living dinosaur type creatures, and a vast city of Gold ruled by a matriarchy. Another interesting thing about Flin Flon the town is it has a statue of Flin Flon designed by cartoonist Al Capp. That's kind of neat. 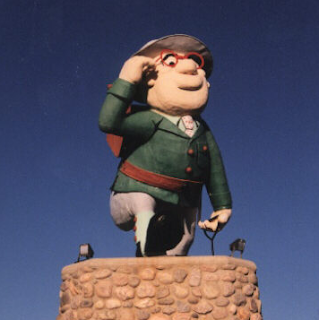 Anyways, its worth a download. So the book centers around the main character of Josiah Flintabbatey Flonatin or Flin Flin for short, an intelligent man who builds a submarine type craft shaped like a fish that allows him to explore a mysterious believed to be bottomless lake situated somewhere around the rocky mountains. He comes out of the ordeal a very changed man, and eventually dies with the world believing his stories the works of a madman, until the posthumous publication of his adventures in the very same novel the reader is presumed to be reading.

While the characters pronouncements are clearly dated (He makes reference to people living on the moon as something of a certainty), and there are cracks about evolution that make you wonder whether Muddock or even the main character as a scientist is for or against. There is a backwards city of "pre-humans" who live with women in charge, which seems to be an outright attack on the ultimate goal of feminist thought of the time, but I still can't be certain if the author was being beligerent or clever.

Needless to say the book has about as much relevant science in it as any movie by Michael Bay. Muddock is no Isaac Asimov, but the book is entertaining enough, and the character of Flin Flon and the adventures he has remind me of actual adventurists of those earlier time periods who would go on expeditions to South America or Africa, or China or Antarctica or who knows where. It makes one think its quite a shame that there are so few places presumably left to discover on our planet Earth. Which likely explains why most Science Fiction takes place in the future or in outer space (or both) nowadays.

Anyways, sexism and political incorrectness and scientific nonsense aside, its not a very difficult read. I wouldn't be adverse to coming across some other J.E Preston Muddock work and giving it a go either. So in the end, I mildly recommend it to anyone with an interest in such books.
From the deranged mind of reedsolomon.matr1x at gmail.com at 9:06 p.m.