So why did Ron Maclean bring up Halifax? 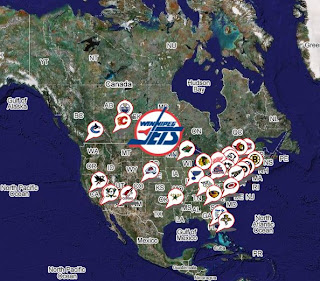 Most people, rightly so, are questioning why Ron Maclean brought up Halifax as a possible NHL expansion zone. The area has neither an arena even close to NHL standards, nor a large enough market presence. Now don't get me wrong, I like Halifax, and I've always wondered why it isn't a much larger city than it is. But no sane person would recommend Halifax for the NHL.

Perhaps Maclean was trying to bait Bettman. See if he even knew where Halifax was. Maybe trick him into confusing Halifax with Hamilton. I seriously doubt he thinks a Halifax team would be successful. Maybe he was bringing up Halifax sarcastically, in deferrence to certain US cities that have teams that don't necessarily have the fans even a Halifax team might bring out. Maybe he brought up Halifax just to mess with the east coast Sydney Crosby fan machine. Who knows. Only Maclean, and he has yet to explain himself.

My own personal thoughts on the psychology behind the action, is that by bringing up such a nonsensical idea as Halifax as an NHL team (Hell, they can't even woo a CFL team) it makes the idea of a Winnipeg team, by comparison, inarguable. Now I think the footprint a Winnipeg team would have would cover a wide area of central north america including Manitoba, the Dakotas, Saskatchewan, and Western Ontario. With pay per view (and the MTS Centre is wired for such a feat) they would rake in quite a payload from fans who like to make use of their new HDTV's. So, Winnipeg, and Bettman admits it, stands a decent chance. Halifax however is surrounded by quite a few, by comparison, nearby teams such as Montreal, Boston, the entire east coast of NHL teams is right there. Theres no logical reason for the NHL to put a team there. That Bettman didn't say anything one way or another showed that he had no idea what Maclean was smoking.

So, whats the deal with the map? That NHL logo is the size of the distance between NHL teams currently unserved in that part of North America, the part of North America upon which Winnipeg is situated and the largest city between any other NHL city in that region. Pretty gaping hole. (Map courtesy of Google maps and NHL Draftnet)

In any case Ron Maclean gave me something to blog about. Thanks Ron.
From the deranged mind of reedsolomon.matr1x at gmail.com at 1:58 a.m.

Why not Halifax i mean the population in Halifax its self only around 400,000 but the team may not be only be for Halifax but for all 3 maritime provinces. all together they have a population of 1.8 million and most major cities around Halifax like Moncton and st.John are only hours away. and i no for a fact Halifax's #1 priority is to replace the now largest arena. and also Ron did say that Halifax was in the maritime region so he was not trying to trick him. and with the size of 1 fifth of Alberta and about the same population you can say Halifax is out of the Question at all.

I don't see it. There are too many teams nearby that compete for fans.

Forgive the lateness of my reply.

Still, your argument made some valid points.