Hey Jack Layton, Thanks for this ad. Lets go for a burger. Ha! Ha! Ha! Ha!

In between the carefully and overly choreographed family photo session slash wedding reception that is the Conservative campaign and the completely miss the point of everything lets drudge up Jean Chretiens old strategies Liberal campaign, it's nice to see the NDP actually try something new. 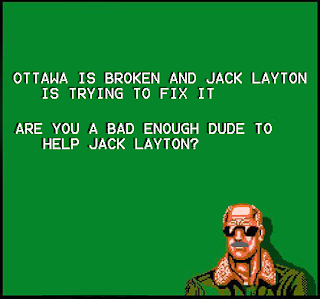 Yeah I think I'm going to vote NDP this time around. I really can't think of a single thing Joy Smith has done of interest ever. I remember she cried when gay marriage was passed. That was amusing.

I think Jack Layton has won my vote. That's me on the left. I hope the road to the election booth isn't overly fraught with ninjas like the last election.

Seriously, I can't stand the conservative campaign. Do people buy that? I'm sorry but my mother was the type of person who overly choreographed everything possible and I see it here too. I don't get a sense of whats real. It's like Stephen Harper is a robotic puppet with a hand up his ass mumbling nonsense in a scientifically conducted method that lulls people into a suggestive hypnotic state. I don't like the idea that that works on people more than him winning. I'd like to vote for the idea of the conservatives, but I know the reality of the conservatives is their record. Do you think Marijuana should be illegal? Vote conservative. Do you think criminals should pay for their crimes? Well, the conservatives are less about punishing people for actual crimes, and more for pushing for stupid crimes like the digital copyright bill or their ridiculous marijuana stance.

And the Liberals.. what the hell. Michael Ignatieff seems like an intelligent smart guy, but his ads have no bite. No teeth.

Maybe I'll look at the campaign brochures of people running in Kildonan-St Paul in a later post. That's always fun.
From the deranged mind of reedsolomon.matr1x at gmail.com at 5:50 p.m.