Labels: croatia, dollarama, england, euro 2008, gary doer, leafs suck, ndp, saskatchewan roughriders, skunks, toronto maple leafs, whah, Winnipeg Blue Bombers
Dollarama is a great store. Aside from Furniture and Clothing, you could go to Dollarama and get almost everything you'd ever need, for the price of ONE DOLLAR. 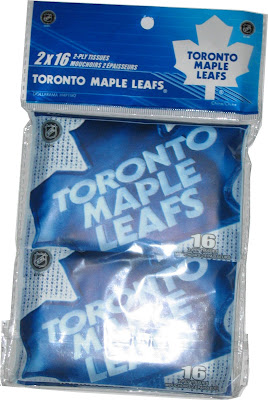 kage contains 2 little tissue packs. Now, why would I buy this if I hate the leafs?

Does that make sense? Yes. Yes it does. Leafs fans are idiots, and furthermore they are idiots who will buy anything with the leafs logo (and some say are to blame for Canada's flag being the maple leaf. Heck they wanted it to be blue) .. Also, Leafs fans are the sports fans with the most reason to cry of any sports fans out there.

So, the point of this post was to mock Maple Leafs fans. Yes, I'll kick you when you're down you're that annoying. The only fans that came mildly close to being as annoying and deluded as Leafs fans are fans of England at the euro/world cups (Soccer, or as its know there, Football). They lost to the superior team a couple days back, to Croatia, and couldn't believe it, made tons of excuses, are out of Euro 2008, have to play Croatia AGAIN for the 2010 World Cup as they are in the same division, and STILL think "OH yeah we can beat them EASILY".. NO YOU CAN'T! YOU SUCK! DONT YOU GET IT? They just don't.

In any case, this guy makes a good point at this link here as to why the Leafs are garbage.

Alas, I'll end this with the CFL where the Winnipeg Blue Bombers lost in the Grey Cup to those evil sons of lucifer themselves, the Saskatchewan Roughriders. Too many injuries destroyed the Bombers chances. It just wasn't to be. I'm actually amazed they made it to the Grey Cup game at all this year. Hopefully they can pull it together, and win it next year. I'll give the Bombers credit for exceeding my expectations, and then meeting them in the Grey Cup. Congratulations to Saskatchewan. I guess we'll have to get a conservative provincial government too, then we'll win. In Fact, I blame Gary Doer for losing the coin toss. Jackass. Increasing the minimum wage is dumb too. It just means more people will be making minimum wage. Why penalise hard workers? Oh right, I forgot. This is the NDP we're talking about.
From the deranged mind of reedsolomon.matr1x at gmail.com at 9:39 p.m.