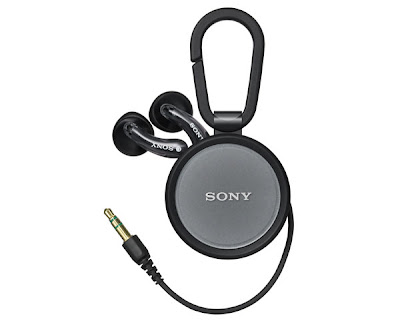 A couple years ago, I used to purchase Sony Headphones exclusively. I was very much a fan of the Sony MDR-E755 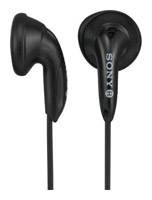 series of earbuds, they weren't too big as to fit poorly, and they were quite comfortable and produced a good sound. Unfortunately Sony phased them out and replaced them with
MDR-E818LP series Headphones in their place, which are bigger, clunkier, and not all black (They have a bit of grey on them). In any case, the point is I was righteously pissed with sony, and have been avoiding them altogether. Now though, they seem to have realised the errors of their ways, and have introduced what may be an original idea in terms of earbud headphones. They have combined a pair of headphones into a convenient karabiner that roll up when not in use and prevent entanglement.

Now, As you can see by the pictures I have provided, aside from being Karabiner style they are reminiscant of the MDR-E818LP series headphones I enjoyed so much back in the past. That plus the fact that they were in the handy karabiner and were on sale at circuit city:the source for $24.99 meant that even if I didn't like them, they were only $25.00 and were probably decent enough in quality that I would find some use out of them. The only real question for me was how the Karabiner was designed.

Unfortunately the Karabiner is poorly designed, the clip part is a cheap piece of plastic that doesn't clip very well. You can go to a dollar store and buy an actual metal carabiner for $1 and it will perform better. Which is what I ultimately ended up doing. the pulling mechanism for the earbuds is decent, but the length of the 3.5mm plug is woefully inadequate, and does not extend beyond what is shown in the above picture. I solved this again, by purchasing at circuit city:the source this $6 headphone extension cord, which had the added bonus of including a volume adjustment. I listen to 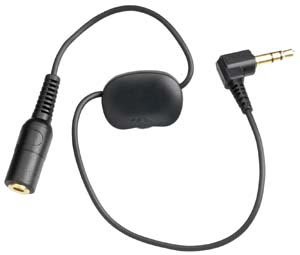 mp3's with my pda most of the time, and having the volume control is very useful. But I'm not going to bitch at sony for not including that, I'm just saying if you want to lengthen the jack cord, this is a reasonable solution, though the cord should still have been a few inches longer in my mind, and the fact that it does not roll up into the Karabiner is poor design. I have usb cords for my ipaq that do a far more effective job of rolling up into their casings, same with those rollup ethernet cables.

In any case, I managed to make up for the shortcomings of the Karabiner headphones, by purchasing the aforementioned volume control headphone extension and a cheap metal karabiner from the dollar store, which I attached to the cheap plastic karabiner that came with this product (as opposed to a pair of keys, which is what that karabiner was designed for) and all in all, it works for me, but Sony should hopefully realise the shortcomings of the karabiner casing, and any future versions could easily be improved with these suggestions.

Furthermore, the cord's could have been a bit longer, but my general dissapointment with the karabiner and casing should not be confused with the excellent sound quality sony gives us as usual. The earbuds are perfectly sized, everything is all black, (there is a pink version as well for some reason, surprised they didn't just go with black and white but went with pink and black) .. An amusing thing I noticed was that while circuit city: the source had them for $24.99 (and I still call them Radio Shack in my mind even though Circuit City changed the name to the source by circuit city here in Canada) it amused me to see the exact same headphones at the Sony store in the exact same mall for almost $50. Which is strange, as the sony style website has them for $24.99. So, all in all, a decent product with obvious shortcomings, but for something that at least to me seems an original idea, that's bound to happen and hopefully they can improve on their future revisions to this product in a way that makes my having to adjust for the shortcomings unneccessary.
From the deranged mind of reedsolomon.matr1x at gmail.com at 2:33 p.m.