AND I'm keeping my word! Todays topic is the new name for the relocated Manitoba Moose! They've moved to St John's newfoundland and of course they need a new name.

APPARENTLY The name in the lead right now is the St John's Caps or Ice Caps. Seriously. The choice is either name yourself similar to a Washington based team despite having no connection, or name yourself after a Tim Horton's beverage.

I have however heard some better names, and have even thought of a few of my own.

Some of the better names I've heard have been: St John's Aviators, St John's Pilots, St. John's Sealers, St John's Icebergs, St John's Explorers.. you could substitute Newfoundland for St John's, but either way, I've come up with the ultimate name. 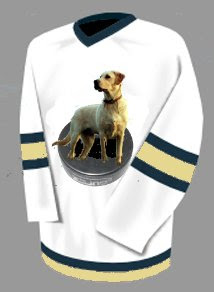 I like Aviators as well. Actually Manitoba Aviators or Winnipeg Aviators would have been a decent compromise instead of .. ah I won't go there. I promised myself I would try not to blog about the Winnipeg Jets for a while and dagnabbit I'm sticking to it!

But Ice Caps.. seriously? SERIOUSLY?
From the deranged mind of reedsolomon.matr1x at gmail.com at 6:24 p.m.

you could have a simple logo based off of a club from a card deck.

and a bloodied baby seal!