ALL JETS ALL THE TIME or WHAT'S IN A NAME?

Not really. I hope to get off the topic soon, unless they choose a name that isn't Winnipeg Jets, in which case I'll be ranting on that for a good two months straight. Anyways here are the reasons I am against renaming the team.

#1 - Tradition. People claim that the Jets belong to phoenix. While the team that is the operational descendant of Winnipeg lives in Phoenix and suffers from possibly worse mismanagement than the Jets ever did, they have no history. Do they truly honour Winnipeg's hockey history? No, only Winnipeg can truly do that. Sure they retired Hawerchuk's and Hull's jersey, but they don't appreciate what that even means. And when they in turn move from Phoenix one day as will most surely happen at this pace, will the third city honour that history? Aside from Shane Doan still playing there, and lamely trying to pull off the whiteout, they have no real ties to Winnipeg. Hell, Keith Tkachuk was an Atlanta player, realistically it's almost a wash! The Jets name and history, for better or worse, belongs to Winnipeg. If the Maple Leafs moved to oh, I dunno, Kansas City and were renamed, and were later given another team, you bet your ass they'd call them the Maple Leafs, despite their horrible modern record. Same with the Habs. The NHL is all about history. More than 100 years of it.

2. No other name sounds good. Moose? That belongs in the minor leagues. Wapiti? Nobody knows what that is. Polar Bears? Mosquitos? Falcons? Shutup those are stupid animal names. When the Jets were around, the one-two combo of the Jets and Bombers made it sound like Winnipeg was a hotbed of the aviation industry. Yes the bombers are named more after a football play than a type of plane, but all the same.. I've always loved the dual meaning. Also Go Jets Go is so easy to say.

3. Merchandising with a new name won't necessarily be better than with the Jets name and a new logo. And True North doesn't even get the full pot of that money ANYWAYS. They only get like 30%! You bet your ass with a new logo people will be snapping them up just as much if not more than the old logo.

4. Bettman said he'd give it to True North for free. Now I want to find out if he really meant it or was just pissed off at the interviewer for implying the NHL is nickle and diming True North (They probably are)

5. It should be named after MANITOBA! NO! FUCK YOU! Winnipeg is the capital city of Manitoba. I don't see anybody in BC bitching about the Vancouver Canucks or people in Ontario bitching about the Toronto Maple Leafs. Yes Winnipeg appreciates your being a fan, rest of Manitoba, but more than 50% of the province is in the city of Winnipeg. WE OUTNUMBER YOU. How many of those season tickets belong to out of towners? Yeah I'm sure more than 50%. Not. Naming it after Manitoba does nobody any favours. Guess what, Toronto has fans outside of Toronto and even outside of their province. Same with every team. If you don't want to root for them just because you don't feel included, well, maybe you shouldn't be included. Hell, why not call every Canadian team the Canada whatevers. They're all in Canada! Idiotic thinking. Have some pride in your province by supporting your capital city, Manitobans.

6. Whatever you've come up with is not better than the Winnipeg Jets. If it was, you'd have said what it is by now. Without locking people into a contract for 3 - 5 years. Nobody likes bait and switch. A majority of ticket owners bought Jets tickets. You know it. Which leads us to..

7. Everyone will be pissed off. Why would you kill this thing as soon as you started it? Why woud you destroy all of that goodwill and momentum that sold out an arena in minutes for the next couple hundred years?

8. So this city can move on and continue growing and building the new stadium, building new residencies and towers and highways and growing Manitoba as a place of infinite potential. We've got the Jets back. We've got Ikea. NOW WHAT? What does someone do when they win the lottery and get everything they ever wanted?

9. I just really like the old Jets jersey design and colours.

10. I'm just gonna make something up here cause I've run out of reasons. Okay how about calling them the Winnipeg WestJets. Branding and sponsorship with WestJet, everyone's happy. Yay.

Now they should get Stan Lee to make a superhero based off of Winnipeg's NHL team. You just know if it's called the Jets he'll be some guy called "The Jet" with some sort of jet. I want to see that. Okay that's number 10, screw the westjet thing.

Also, DO NOT bring Benny back. Nobody liked Benny. Everyone hated Benny. Get the costume for Kaboom the polar bear from the defunct Winnipeg Thunder basketball team. give him some blue colours and change his name to something jet like sonic-boom or Mach 5 or Turbo. Hmm, I kinda like Turbo. Give him some aviator goggles or something and a scarf and a flight jacket. That would play well in Winnipeg.

In conclusion, it's too late to do anything about it. The team has to be called the Winnipeg Jets.

Also who doesn't want to see the Jets vs the Sharks? 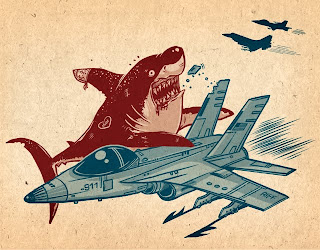 Image Credit: chunkysmurf at deviantart
From the deranged mind of reedsolomon.matr1x at gmail.com at 5:25 p.m.

The name should reflect something about our city. I recommend the Winnipeg Shankers!

I agree -- the Thunder mascot would be great. Good job remembering his name!

The Thunder had a nice package: good name, good uniforms, AC/DC, and didn't they have cheerleaders too?

I admit I had to google his name.