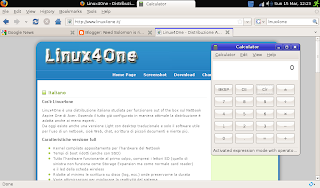 I deleted Linpus linux lite from my Acer Aspire One finally. I installed the latest version of Italian linux distribution Linux4One, an Ubuntu derived distro. It is much better out of the box than most other distros, even including Linpus, which was designed for this PC.

What I like about it is that it is really well configured, it comes with the Ubuntu Netbook Remix interface, and its surprisingly well thought out and useable. I don't even miss the taskbar. I like how everything is combined into the top toolbar. 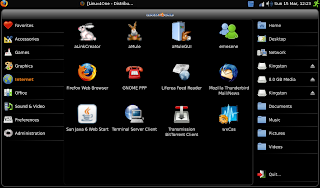 The default colours, like Ubuntu itself, are a hideous Orange, but it wasn't difficult to change those settings in the preferences menu, now its a blue-ish black theme (though oddly enough it took a reboot for the changes to register).

Firefox, unlike with Linpus, is Firefox 3.1. Much better, and it even had Flash installed by default like Linpus, which was a bonus.

Wireless didn't work after first boot installation, for some reason, but after a reboot it did work. I haven't been able to get my Novatel USB MC950D 3G modem working yet either, but I don't really know what the problem is with it. Still, it didn't really work on Linpus either, and at least theres a chance a future update of this distro will improve the 3G modem support (It's based on an older version of Ubuntu, unfortunately, so it doesn't have Jaunty's awesome 3G support in its wireless network manager. But I've only been using this for less than a day and already my experience is better than it ever was with Linpus. Plus it boots surprisingly fast, almost as fast as Linpus.

All of the special keys work, even the key to disable wireless, increase volume, etc.

Originally the SD slot on the right hand side didn't detect my 16GB SDHC card, but on a later bootup, it did. And it has since then.

It comes with VLC by default, which is better than what came with Linpus, but all the same, I wish they had a few more files in their file repository. Like a good version of Mplayer, and some KDE programs would be nice too. Konversation and Amarok perhaps, but there aren't any irc programs in the repository for Linux4One. I assume you can simply install from the Ubuntu repositories, or even debian, but a few more programs would be nice. Also a few more games. Solitaire for example, and Minesweeper. I haven't used Windows in years personally, but they're the type of mindless game you can fire up to kill some time, same with Tetris perhaps. Linpus had more games by default, though not the best ones. Also Gimp or Krita. There is a dearth of default applications in this distro, but the basics are there and the configuration is top notch.

Also Compiz doesn't seem to be available. It's probably not necessary, but Linpus had it.

But other than that, I really like it. It's one or two revisions away from being perfect. Also the install felt like it took forever. Nothing to do while it was happening, like playing a game of solitaire or something. 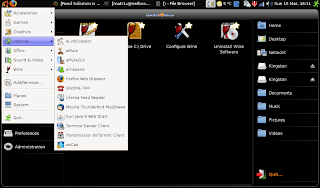 I noticed Linux4One uses Ext3 by default. I wonder if that is the best choice for a SSD based distro. I believe Linpus used Ext2. I disabled all logging in the bootup settings, so that should minimize some disk writes, but all the same, thats a concern that imediately popped into mind. I wonder if theres a filesystem for Linux that uses SSD's more efficiently.

I added a show/hide desktop to the top taskbar, along with the weather and on the far left next to the firefox button, I added the Ubuntu start button. It is wholly unnecessary, completely superfluous, but I feel it adds something.

Fonts, by default don't appear anti-aliased. Smaller screen might benefit with having anti-aliased fonts (or perhaps a prompt)

Wine. Wine is missing, which I occasionally use for pokerstars under Linux. It's not a huge deal, but again it shows the lack of applications in the repository that most Linux users take for granted until faced with a lack of packages for them. I don't want to frankenstein up this distro more than is necessary, and by no means should wine be a default application included in the install, but this distro could use with a few "extras" such as wine, some games, some kde apps, etc.

And I really like this system now that I changed the theme to a blue-ish theme/background. The startup logo is also nice, and Linux4One has some otherwise good choices, but that orange theme really should go.

While the kernel that comes with Linux4One doesn't seem to have a usbserial module that includes built in support for my 3G modem, the 2.6.24 kernel that Linux4One uses by default, oddly enough, does. Still, however, the network manager does not give the ability to configure the 3G modem, I had to add Ubuntu repositories and install KPPP, and set up the modem to use rogers wireless. While this does not really make things convenient, at the very least, If I'm on the road, I can always boot into that kernel and use it with my 3G modem to access the internet. Hopefully future revisions of this distro include the usbserial module. My theory is they use the same kernel as the one the kuki-linux project uses, available as linux-image-2.6.28sickboy-kuki_0.4_i386.deb on that website. I tried that kernel and it gives the same problem. Sadly, the Ubuntu kernel does not work with the wireless card, so if I want 3G, I have to use this kernel, if I want wireless, gotta reboot and use the other kernel. Ah well. Also grub uses a 1 second delay in Linux4One, which while it speeds up the boot process, I decided to change to 3 seconds in /boot/grub/menu.lst, cause this thing boots up fast enough that I don't really notice the two seconds, and when I need to select a kernel it does help.

Also recently (other than kuku-linux) noticed that theres another distribution of linux which makes an attempt to work with the aspire one out of the box, easy peasy linux. However it seems to be in the same boat as kuki and Linux4One, in that not everything yet works. I'll probably give it a try out when it reaches version 2 in the next month or so (same with kuki)
From the deranged mind of reedsolomon.matr1x at gmail.com at 12:01 p.m.

But the full version is ugly slow, boot around 2 minutes. Take a look at the youtube vid. I installed the lite version on my 110L, it boot in 20 seconds. Thats better, but worse if you look at moblin2. They boot up the one in 5 seconds.