Green Lantern Movie (Why not 3D?)

This is old news, but they're making a Green Lantern movie. They're filming in Australia, which is incredibly perplexing to me as Green Lantern as a character generally is based out of California, which is where Hollywood and the like are based. I mean, I understand about tax credits and such, and GL is a character that travels in space a lot, so Australia might have a lot of outer space style locales, but it just bugs me. 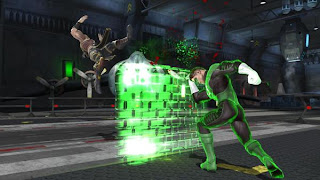 Apparently every actor who ever played a starship captain in a sci-fi TV series is up for the role of Hal Jordan. Nathan Fillion, Chris Pine. I say go with Patrick Stewart with a bad wig. He'd do a great job. I'm not a Hal Jordan fan anyways. I like Guy Gardner and John Stewart more. And Kyle Rayner is more entertaining than Hal. But Hal was first (STFU Alan Scott fans) so they should start with him.

The biggest beef I have is WHY ISN'T WB MAKING THIS MOVIE IN 3D? Green Lantern creates solid green light constructs using his force of will through his ring. Imagine what it might feel like to have that in 3D. Giant Green Hammers, giant green aliens, giant green hands, force fields. All in 3D. How much harder would that be? It's being computer generated anyways. Hal Jordan in a jet fighter flying right at you. Imagine being in outer space with Green Lantern for the first time and you feel like you're there with him in 3D from the perspective. This superhero movie begs to be made in 3D. Heck, George Lucas wants to go back and add 3D to Star Wars, he knows it'd be awesome. But it was never designed to be in 3D so it will feel like it was added on after the fact. But with Green Lantern, imagine the main character being thrown through the sky and you feel the perspective of that action. It seems a no-brainer.


In any case, the movie will be released in 2010, probably in the summer, which is only a year away and they haven't done any filming yet. Hopefully it'l be good.
From the deranged mind of reedsolomon.matr1x at gmail.com at 11:51 a.m.