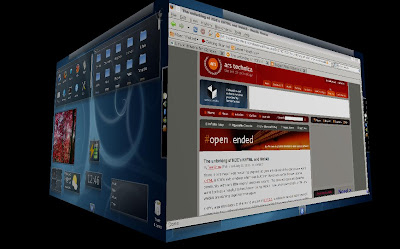 Well, This Thinkpad works surprisingly well with Kubuntu Intrepid. There is a lot of instability but as it is running with bleeding edge alpha software, that's to be expected.

There was some slowdowns and crashes originally with the system, but that seems to be the fault of Ubuntu itself. In any case it seems to have stabilized a bit more with each update.

The MMC/SD/MMSpro etc slot still doesn't work, though it is not a particular concern for me as of yet. This is well seems to be an Ubuntu/Linux related issue as the particular device itself perportedly worked in a previous kernel revision on certain Dell PC's, so .. I'm not fussed It'll work itself out eventually.

Suspending/Hibernate is still an issue as are ACPI Thinkpad keys/Function keys. That said, I doubt this won't get worked on in the future. Hibernate at least seems a little bit closer to functioning. Suspend seems to work occasionally though.

Apparently the thinkpad SL-400 comes with a Conexant soft-modem. Now, I don't really use dial-up really these days, but it's nice to have the option if travelling where there isn't wifi (just plug it in and use the dial-up.. 295.ca is a cheap backup dialup company I pay for but rarely use) and its nice to know the modem is supported through the linuxant project. I just ran their setup tool and it seemed to download the required deb, then fail in compilation. STILL, it tried, and again I have faith it'll work itself out in a future kernel revision once this version of Kubuntu becomes more stable. Again, not like it's a pressing issue.

An interesting thing is that the microphone is built into the assembly of the camera, so its good that I bought a version with a camera or I would have to add an external mic to talk on skype or whatnot. I have yet to actually be able to see anything on screen with the camera, but it lights up nonetheless and is detected, so I remain optimistic.

As an aside, I also can't wait for KDE 4.2 and more compiz effects built into KDE 4. A lot of stuff that I like to use occasionally like Amarok and Kopete crash if I want to use them for anything useful, but I love the state I've gotten KDE into. It looks halfway decent. Again all it really needs is a Mac OSX like bar at the bottom. Konqueror in KDE 4 is a lot better than it used to be. I wonder if they're using webkit. Yep, its using webkit. Just like Google's Chrome and Apple's Safari. I've always liked Konqueror, so its nice to see that it has come full circle in a way.

Anyways like I said earlier Skype worked pretty well right out of the box so to speak. Aside from video which I've never cared much about.

The keyboard sometimes really bugs me. I hate the page up key and page down key being in the arrow key area. I used to use that as a place to rest my thumb, and use my index finger on the end/delete/home/insert/page up/page down section, but now I get confused and have to look at the keyboard, and since this thinkpad doesn't come with a thinklight (for one of the only reasons I might actually use it) it gets annoying. also the function keys are too close to the other keys, its hard to feel your way between them. I used to be able to feel around the page up key then move down to the F12 key. I mean, if you're just a simple touch typist, then what do you care, but if you're a thinkpad user key placement is important, and any tricks that speed things up are welcome. (I mean, how many touch typists realise that there is a raised bar on the f and j keys?) Anyways, keyboard design is very important. I mean, it feels like a decent quality keyboard, thats not the problem, and the design of the thing, I see where they were going with it, but did they do any real world tests on this keyboard? Or did they just see what their competitors are doing and assume people liked it. Heck, I use page up and down a lot, and in its current place I feel like I will get carple tunnel syndrome if I use it. Page up and Down should be used with the index finger and be placed somewhere in the top row. Preferably with insert/delete and home/end. It just works there. The arrow keys should not be impeded with other keys around them. It'd be like having an NES controller with the A and B keys incorporated into the direction pad. They would never do it! But I've gone off on a tangent. Anyways, another thing is neither the trackpoint or trackpad cannot be disabled in BIOS. This is a grave annoyance. Especially since I have no idea how the latest Kubuntu sets this stuff up. Uses Hal or DBUS or something which I have yet to understand or bother to research. Can't just delete it from x.org and be done with it anymore. Also, with regards to trackpoints, I wonder why they don't put a scroll bar trackpad somewhere along the right hand side. It doesn't have to be full size, in fact it shouldn't be. just a little vertical scroller trackpoint that you could use your index finger to slide up and down the page. I think it'd be useful anyways, it might get me to shut up about the stupid page up and down keys being moved. I hate the trackpad itself, but I don't mind using it as a scroller. Another thing is I managed to find a way to get the trackpoint to scroll using the middle button. I wish that was the default setup. But I had to resort to google to find a way to do it. Hopefully in the future KDE's mouse settings feature such advanced mouse configuration options.

Again with KDE, Plasma really feels raw. There needs to be ways to snap things to a certain size. Still, what I love most about Plasma is it totally reminds me of Tandy Deskmate, especially after I've configured a few applets. I do believe theres a lot modern OS's can learn from really old desktop interfaces rather than simply looking at Macs and Windows. Still its fun to see the improvements happening quickly. The weather applet finally works. Dunno about the media player applet, it doesn't work with Songbird, which is the Firefox media playing program which I never heard of before but its quite good (aside from the fact that it doesn't know how to display the text of all the song names in the playlist.. seems to be a font rendering issue) Still, its no Amarok, and it'l be nice when Amarok finally works in KDE 4. 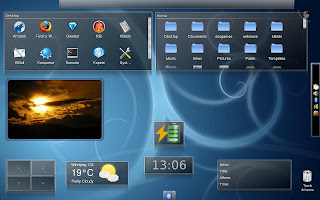 Another thing that bothered me was sound output was a little on the quiet side by default. I even plugged in a little external speaker and couldn't get that loud of a sound to watch a projected movie with. I don't know if the problem is with dragon player or what, but its still a buggy movie player. In any case, I found right in the mplayer man page that you can simply do "mplayer -af volume=20.1:0 -vo xv dvd://" and have a louder default volume from your dvd's and so forth.

hmm, for the record, the camera shows up as:

So in conclusion, every piece of this laptop works/kinda works/will eventually probably work with Linux. Considering how much worked out of the box, That's pretty impressive. Most of my problems are with the bleeding edge and not with the Laptop itself.
From the deranged mind of reedsolomon.matr1x at gmail.com at 12:00 p.m.