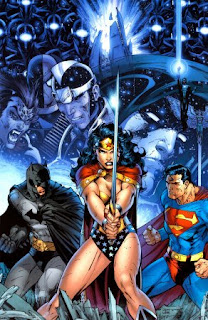 DC Comics has a weekly comicbook series titled Trinity that I read in the comic shop basically skimmed through it. The premise seems to be tied to Final Crisis, which is another Comicbook that I'm actually buying. Something about Superman, Batman, & Wonder Woman being representative of a God-like trinity or something. I dunno I haven't bought it yet even though I like the writer/artist team of Busiek/Bagley. Basically I found the first story too short, and the Fabian Nicieza stories in the back of the issue to suppliment the comic really uninteresting. Something about a chick with tarot cards. ANYWAYS, that got me thinking about another trinity. The Computer Operating System Trinity.

Originally there was the trinity of Amiga/Mac/PC. There were other trinities of course, but thats the one that came to define that era of computing, everything else was sort of an also ran. Hey, I liked my Commodore 64, but I doubt batman ran his bat computers on a C-64. I'd say Superman would represent the Amiga, batman the PC, and Wonder Woman the Mac.

Good things seem to come in threes. Who would have thought. I guess theres the Firefox/Safari/Internet Explorer trinity of web browsers, theres the MS Office/WordPerfect/Open Office trinity (granted WordPerfect is essentially irrelevant today), levels of government usually have 3 levels. Pyramids have three sides, HOLY CRAP! I CAN GO ALL DAY! THREE! Why have I never noticed this before! Maybe my brain is shutting down I'm suffering a stroke and I'm turning into one of those nutjobs who sees connections where there are none. OR MAYBE I AM GODS PROPHET.

Now there is the operating system trinity of Mac OS X, Linux, and Windows. Mac OS X I give to Superman, since he's a reporter in his day job, Windows to Wonder Woman, and Linux to Batman. Therefore Linux = Batman. Thank you Kurt Busiek for making that clear to me.

So to people out there writing software, Make sure your computer programs will run on every operating system of the trinity. I mean, do you really want to cater your software only to Wonder Woman? It's not really that difficult to create cross-compatible software in this day and age. Get your act together.

Green Lantern used to be a trinity of John Stewart, Guy Gardner, and Hal Jordan, now its more of a four musketeers thing with Kyle Rayner. Damn you Kyle Rayner! You're like a 4th wheel on a 3 wheeled car! COMPLETELY USELESS.
From the deranged mind of reedsolomon.matr1x at gmail.com at 11:25 a.m.