A WebComic world minus Minus.

Labels: dinosaur comics, minus, pbf, webcomics, xkcd
While perusing Dinosaur Comics, by Canadian genius comic strip writer extraordinare, Ryan North, I noticed a little blurb mentioning the end of a webcomic series called Minus. Its beautifully drawn in watercolours, about a little girl named Minus with powers akin to the kid in the Twilight Zone episode "A Good Life". (which was later referenced through the second season Simpsons halloween episode where Bart turns Homer into a Jack in the box - "Bart's Nightmare"). Only Minus is relatively more benign. Usually. I never heard of this comic series before, though after reading all of them, I realised I had seen some of them posted on the occasional web forum. Anyways, it was a good read, relatively short too. But the writer clearly did as much as he creatively wanted, and it was generally pretty unique and clever. A lot of subtle influences, some Japanese manga influences were readily apparent.. there might have been a little Calvin and Hobbes thrown in. But again, it was very unique. (copyright Ryan Armand, aka rezo/copyrezo http://copyrezo.deviantart.com/) 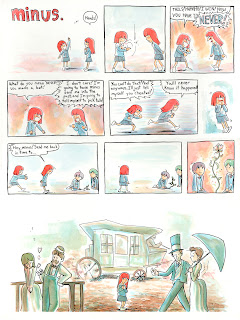 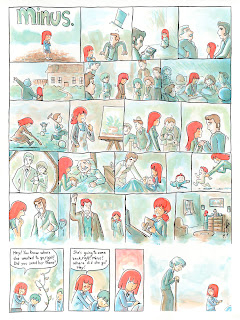 In any case, there were a series of 3 strips that hit me on another level. As shown above, In them, a girl asks Minus to send her back in time, though before saying when she wants to go back, is instantly sent back to the 1800's (I think -- its never specified) She obviously has no way back but to live her life. Falling into a wormhole and ending up in another time or dimension is a constant fear of mine, something I suffer to put in the back of my conscious mind every day, and this webcomic storyline completely got to me. 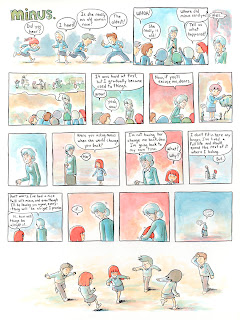 I probably would have ended it differently, maybe with the old woman having a granddaughter who looked exactly like she did with the exact same name, then everything continues as if nothing happened. I didn't buy the idea that someone wouldn't want their youth back if they could get it. But otherwise it was really well done.

Other strips in the series were funny, but that one really brings home that while you may be enjoying your 21st century life, if you're not careful, bam, you can be sent back in time to the 1800's or the time of the dinosaurs just by walking in the wrong place.

That's probably why the golden compass trilogy was interesting to me. Heck, I watched the TV series Sliders. And the whole biff tannen alternate universe in back to the future gave me the creeps. Perhaps I'm just sensitive to time paradoxes and parallel earths because of how important I am to every single universe that exists in the time-space continuum. That must be it.

Falling into another time or dimension is a real problem. that affects millions of people every year. There needs to be more awareness. I read about this stuff in Time-Life's mysteries of the unknown once so its real.

I also like xkcd and Perry Bible Fellowship.. but who doesn't? I should look for some other webcomics. I despise comics in newspapers these days. Bravo to creativity! Hurrah for the internet! Beware of timeslips!
From the deranged mind of reedsolomon.matr1x at gmail.com at 11:58 p.m.