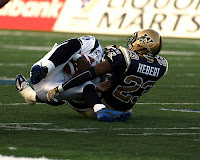 If, like me, you are from Winnipeg, then you've made this statement many times over the course of your life. The Winnipeg Blue Bombers, our CFL team, needed to win one game to lock up first place. They failed, and now the odds of them getting that first place position and the bye week that acompanies it is in the hands of Saskatchewan. If Saskatchewan beats Toronto, and the Bombers win their next game, they can still make first place and beat Toronto. But the odds of that are like 5%. So the Bombers blew it yet again.

I've never attended a Bomber game where the Bombers have won. Maybe I don't go to enough Bomber games, but them winning when it counts (like a game against Hamilton, CMON) would go a long way to convincing me to shell out money more often. I understand you cannot win them all, but why is it that every Bomber game I go to they lose? They still lose when I don't go, but I try to go to games where they're playing the worst teams in the league to give them a chance to win when I go to their games, but no! They always lose those stupid games. But thats beside the point.

The point is, the Bombers cannot withstand any little injury to the team. There are certain players who are good, who win games, and then theres the rest of the team who are mediocre at best.

So now the Bombers have to take the hard road to win the Grey Cup. I've never seen them take the Hard Road and end up showering us with anything but excuses for when they inevitably lose. I suppose it could be worse, I could've been born in Hamilton. I mean the Bombers are at least in Second place right? Whats so bad about that? Do they deserve to be in second place though? Theres no awards for coming in second.

So now us fans in Winnipeg can watch as those Fucking Bombers blow another season and become the first team to get knocked out of the playoffs. Fucking Bombers.

Heres a video someone made of the Bombers in better times

From the deranged mind of reedsolomon.matr1x at gmail.com at 3:46 p.m.