In the early years of Calvin and Hobbes (1986-89), when newspapers announced the comic strip as a winner of their annual "reader polls," Watterson would occasionally draw an original sketch for their articles. I'm actually looking for fellow Calvin fans in these cities to go to the public library, look up the following reader poll articles (in microfiche archives, etc.) and see if there are any such sketches:

Thanks for the help!

My 10 year old self little realized that my local leftie nutjob newspaper.. err.. I mean, the Winnipeg Free Press, was one of the earlier newspapers to carry this strip. In any case, the love for Calvin and Hobbes was great even within its first years of existence, and it shows in the article that acompanied the drawing Bill Waterson made that I am about to show you.

I decided, HEY, I know where the Library is, I can take the Microfiche from July 1st 1988 and get the picture and help the guy out. Alas, July 1'st of every year in Canada is Canada Day, and the Winnipeg Free Press don't work holidays (which I don't mind on Christmas, but how hard is it to publish an issue on Canada Day? It's always bugged me)

I decided to hang in there, like the original LOLCat, and lo and behold, the image was on July 9th, with an Acompanying article. So first, here is the image as drawn by Bill Watterson before the cruel world broke his spirit and bade him to stop writing anything Calvin and Hobbes related. 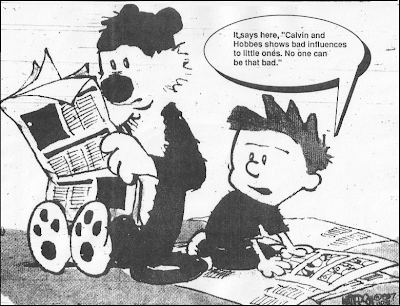 Cute. Not his funniest work, for sure, its basically quoting a humourless Winnipeg woman who may or may not be in a mental institution today, who was most assuredly also lamenting the lack of Beetle Bailey or Family Circus strips on Sundays.

Anyways, whatever I can do to help the world document one of the greatest comic strips of all time, I will. Heres to you, guy whose name I don't know who put together the Calvin and Hobbes web page I referred to earlier, and heres to you Bill Watterson, wherever you are, Thanks for making me realise at an early age that as talented as I was at making Comic Strips, I would never achieve the brilliance of a Calvin and Hobbes or Far Side. No, I decided, I would n 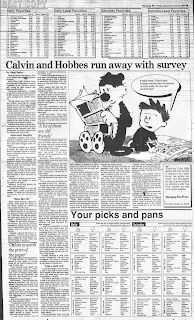 ot subject the world to another Hi and Lois or Family Circus. Also my humour is lost if I cannot curse. Perhaps I should write a screenplay for a comedy involving teenagers trying to have sex instead.

Anyways, the Article is on the right. Hopefully it is legible enough. OCR scanning of the image seems to take a long time on Kubuntu, so, for now just an Image. You can click on it to get the full screen image, because its probably too tiny to read it this way.

It's a fun article, considering its almost 20 years old. A lot of the old people keeping certain comics published are clearly dying off, but their curmudgeonly work is done, the comics page is clearly not what it once was. Sure there are great strips, Pearls before Swine, and the rest, but Peanuts is still being published, which it probably shouldn't be (as much as I enjoyed it) Same with B.C.. and Beetle Bailey and Family Circus. Leave the classics to their collected books, and lets give more comic strip writers a chance to make something great again like Calvin and Hobbes (though not a horribly written wannabe like "Red and Rover" .. talking dog? C'mon.

Although, keep Marmaduke. It's only a crappy comic strip until you realise that Marmaduke is an Asshole. HE THINKS HE'S PEOPLE!!!!!!!!!!!!

Followup: I looked closer, and realised this image is the same image as the one from the Houston Chronicle on January 31 1988. All that work, and Watterson was just being lazy. THANKS A LOT, WATTERSON. Anyways, the acompanying article at least is interesting, and the typed out alternate quote for Calvin is amusing, though one wonders if the editor put that in there, as it doesn't share the same lettering as Wattersons other strips.. Regardless, the guy who maintains the Calvin and Hobbes site can cross the Winnipeg Free Press off his list. I guess Watterson didn't think us yokels in Winnipeg would NOTICE. 20 YEARS LATER, YEAH WE NOTICED.

... cough.. anyways... whats done is done. Hopefully we get a personal apology from Bill Watterson for this grave insult. Hopefully in the form of a never before seen Calvin and Hobbes strip. ...............


From the deranged mind of reedsolomon.matr1x at gmail.com at 11:14 p.m.