Step Right Up! Everyone's an AllWinner!

Recently my interest has been piqued by open hardware platforms, more specifically, arm based open hardware.  If you've been following the saga of the educationally directed Raspberry Pi computer device, you'll understand where I'm going with this.

Personally, the Raspberry Pi does not meet my requirements.  It is interesting, and cheap, and offers a lot of options to many people, but it is neither open enough nor feature filled enough for me.

Still, I've been keeping abreast of various happenings in the embedded Linux and Android spaces.   Android of course, is Google's Linux powered OS.  And there are a lot of Android phones and tablets out there.  Many of the cheaper (price and/or quality) variety.  There are also a plethora of TV/Media devices out there.  They use a variety of different chips and configurations.

Now my ideal solution at the moment is an arm based computer capable of running at 1 gHz or higher.  Paired with a graphics processing and decoding chip that was fully supported by Linux without resorting to the use of binary blobs.  I'd want VGA and HDMI output, and of course the ability to bring my own linux distro (Arm compiled of course).  Gigabit ethernet, bluetooth, and 5GHZ capable 802.11N wireless would be my preference but not deal breakers.   Aside from my wireless preferences, the Allwinner A10 chip offers most of those features already and is already available at ridiculously low prices.

Most interestingly, it is available in the $100 Mele A100 media center.   Which can be hacked rather easily to run Ubuntu ... I don't much care for the design of the device, I'd prefer if it was in a similar form factor as my current living room device, and I'm certain sooner or later someone will release a device to my specifications.  The sooner, the better.

Currently I have a Pivos media player in my living room.  It is satisfactory, but I would love to have an XBMC based Arm device there instead.  I'd even pay a premium if I knew purchasing it helped support the XBMC development team.  Now, on its own, the Allwinner A10 can't be expected to drive an XBMC environment.. but paired with the recently reverse engineered and thus open hardware Mali400 GPU, which it frequently is, the AllWinner A10 could be an excellent option for an XBMC based media device  You could also use some other decoding chip like a broadcom crystalHD, .  Heck, it'd make a decent cheap computer terminal in general for people.  Have a widescreen TV?  Plug in the device to the HDMI, connect to the internet, and voila.  Pair it with a Flymouse of some kind with a built in keyboard, and you're set. Here's a mockup of what I think it'd be cool to see visually. 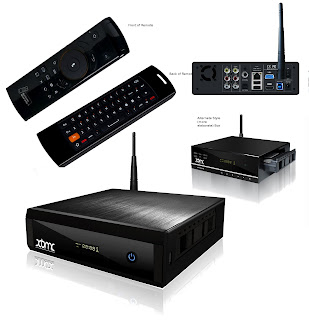 Could Ubuntu or some other Linux distributer brand their own Mac Mini style arm devices and sell them on their website?  Sure they could.  Anyone can.  Get them built to your preferences, and you can call them whatever you want.  I think they'll be everywhere within a year.  And Microsoft probably knows as well.  Hence their secureboot initiative not allowing their own arm devices to run competing software.  They're scared, I think this is going to be huge.

Aside from the Chinese manufacturers, theres Rhombus-Tech, who have been on top of this for a while now.  They have their own plans which are also interesting.  They plan to re-purpose the original PCMCIA slot architecture as a replaceable hardware slot.  You could then have generic netbooks, tablets, or other devices, plug in the EOMA-68 (their designation for this card), and have yourself a fully working easily upgradeable device.  That's also pretty cool.

Heres the thread on xbmc's forums discussing the possibility.  (for the A10 in particular, there are other threads related to Arm devices in general)

Heres some people on the SA forums discussing it.

Do a google search for Linux or XBMC +Allwinner A10 for more info.  This is going to be an interesting year for Linux based devices.

*note, as of today, 8.20.2012, there are significant hurdles in the Allwinner A10 GPU running XBMC.   Not the least of which is the seeming uncooperativeness of Allwinner themselves with the XBMC team.  If you want a well supported XBMC device, get the PIVOS XIOS.
From the deranged mind of reedsolomon.matr1x at gmail.com at 9:28 p.m.