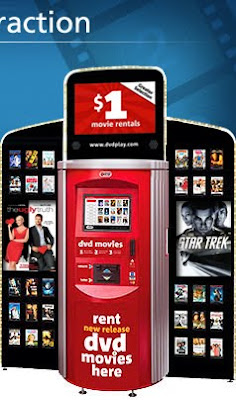 So I saw one of these DVD rental vending machines at a Safeway here in Winnipeg the other day. I have to assume its fairly new to Winnipeg though they've been in Calgary since 2007, according to an article I googled.

Anyways, they appear to be operated by a company called DVDPlay.com, who were recently acquired by a company called NCR, who are going to rebrand them as Blockbuster kiosks.. and presumably raise the price if my experience with blockbuster in the past is any indication, though that's just my own personal speculation. Still, seems like a decent price, under $2.. though I have no idea what actual movie rental stores charge as I haven't rented a movie in years. If I really want to see a movie I either see it in the theatre, buy it used, or buy it new, depending on how interested I am in it.

I like weird vending machines, it is the source of my constant bitterness and resentment towards the country of Japan for its vending machine have status.. but its good to see some new ones show up in Winnipeg. I was almost tempted to rent something until I realised I'm sadly not on holidays for another couple weeks. Almost got me there, Safeway. so close.
From the deranged mind of reedsolomon.matr1x at gmail.com at 2:25 a.m.