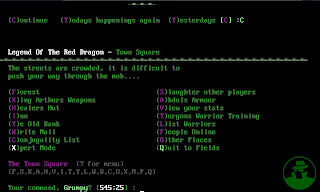 I wonder how many Winnipeger's (or Manitobans even) remember the era before the internets, when BBS's reigned supreme, from the late 70's to the late 90's. I doubt there are that many of us.

I recently was reminded of the era of BBS's by the BBS documentary project. Which is a set of DVD's that give an overall biography of that bygone era. Now, the DVD is released under a creative commons license so you could probably download it, but it is extensive and I think worth the money but that's neither here nor there. I believe that the author of said project is also the administrator of textfiles.com, which collects a number of old "text files" that appeared on many bbs's. Amusing and timeless bits of nonsense like "How to Pick a Master Lock" or "The Bastard Operator From Hell"

In any case, it is a noteworthy and commendable act of preservation and I am supremely glad the guy was able to turn it into something he enjoys and does full time. That is neither here nor there though. What amused me was perusing a compilation of the old 204 BBS list was the fact that the BBS my friend ran and I co-sysop'd on (And I mean co-sysop, I wasn't just some douchebag who held the title, I helped with everything) has the same phone number that my mother has for her home phone number currently.

The odd thing about that is before she switched phone numbers, the old phone number we had was receiving numerous prank phone calls and/or auto-diallers. In any case, too many people were misdialing or just plain annoying my mother and she was so fed up she had to switch. Now in all this time since, she's received little to none of the same prank phone calls. I suppose there are less auto-dialers out there and less and less people trying to connect to BBS's or faxes or whatnot. The sad thing is somewhere out there I'm a little sad that the number that belonged to our little BBS received less random calls than the phone number my parents held for maybe 20 years before switching. You'd think something published in many BBS lists even after the fact would be worse, but I guess she never noticed.

A part of me misses those days, dialing up local BBS's in Winnipeg like Scorpions Lair, Fighting Irish BBS, The Dark Zone, Beebo the Mutant Sloth (Multiline! Wow!), Cop Shop..(Which moved to Brandon at one point but had the best Ansi welcome screen), There was also the ever useful Generic BBS, home of the Generic BBS list, and later the 50 Foot BBS ran by Steve George who seemed to take over the BBS list afterwards (and he had a BBS review which I'd love to read again today for nostalgia purposes.) There was I believe Craig Foreman and his Life in the Fast Lane BBS which anyone who had the misfortune of dialing knows what I'm talking about. (Aside from running on a glacial 8088 that is) .. There were others I'm certain to have called that I'm forgetting the names of, many are not even listed on textfiles.com or maybe I'm not remembering them correctly. I mean theres Steintech computers on Main Street which I see every day and it reminds me of Steintech BBS (perhaps theres a connection?). There was another BBS that existed running Wildcat software that was basically in its death throws and was basically just set up to allow people to leach as much software off it as possible until he took it down. It went F****** or something I think but I can't remember what it was called. That place supplied me with all of my file sharing files to upload on websites with file ratios. They used to publish the BBS lists in the Computer Post which you could pick up at Safeway or whatever. It was always good fun, I wonder if I still have any copies of that stored away anywhere. I doubt it, sadly. Maybe they have them at the Winnipeg Public Library? I wonder.

A part of me is curious about whatever happened to all those people. I can see some of them are online. Are they still in Winnipeg? Did they move East? West? Granted I never went to the yearly BBS BBQ they usually had, I think either at the Forks or at Assiniboine Park. But it was a formative part of my youth, plugging away on my Tandy 386sx with Telegard. It's funny how the Internet is worldwide yet theres probably less local interaction than ever. I don't count facebook, though you could look at facebook and see something similar to what BBS's were back in the day.

If there are any survivors of the 204 BBS Scene wandering across this page, and you've got some historical documents you want to share, feel free to comment in this thread or send me an email.

The textfiles.com (incomplete) compilation of the 204 BBS scene can be found at http://bbslist.textfiles.com/204/.

Hey, speaking of Winnipeg BBS's, theres a Facebook page. As much as I loathe facebook, there you go.
From the deranged mind of reedsolomon.matr1x at gmail.com at 6:59 p.m.

The View from Seven said...

I remember trying a few local BBSs out between 1992 and 1995, including Limbo's Land, System 6626, Inquiring Mind and Generic BBS.

Generic, where I logged on as Doctor Zero, was the best. Even though the discussions sometimes became heated, it never lost its sense of community. Miss Minx enforced discipline but also organized social events; right-wing Tiny and left-wing Stan never saw eye to eye; The Crazy Guy was always ready to jump in with a humourous quip; and Oxygen and Arcturan Senecal always put a lot of thought into their comments.

And then there was Eight Ball, who shocked us at the barbecue when he turned out to be about 12 years old. He had writing skills that were well beyond his age. A bright kid then who's probably studying for his Ph.D. now!

I met most of them in person, but I still regret having missed an opportunity to meet Arcturan Senecal in person, as he quickly became an online ally of mine. I'd still buy him a beer after all these years.

Great memories. The BBS quickly became obsolete when the Internet took off in 1994-95, but it's too bad the same sense of community couldn't be replicated on the Web.

I was late to the BBS scene, I started using BBS's in Winnipeg in 1998 when I was still in High School. Wish they were still around! I used to frequent Robin's Universe, Dragon's Lair, Echo Beach, Frozen Thoughts.

I remember meeting up with a girl from Robin's, but nothing really came of it, haha. Turns out people people lied about themselves online back then as they still do now. :P

I loved BBS! My cousin taught my brother and I how to log on and we were hooked. I loved the Dragons Lair, Frozen Thoughts and one more, but I forgot its name. It was red and scary when you logged in, I think the guy who ran it, his name was "Diablo". I miss chatting with the people on there and playing the games. Times were so simple, I can still hear the sound of our dial up modem :-)