I learned something today 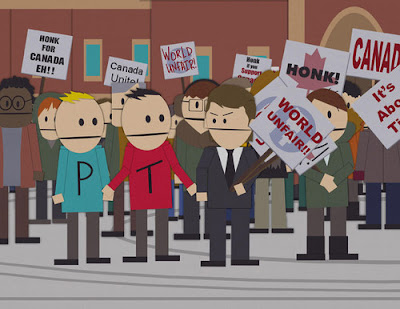 So its been a couple weeks now since South Park creators Matt Stone and Trey Parker created a brouhaha out of not airing an actual depiction of Mohammad on TV. The 201st episode is nowhere on the comedy network's website. I didn't catch it on TV but apparently it was the censored comedy central version. Which comedy central forced them to air.. at least, according to this post on Macleans.com:

"The Comedy Network prides itself on airing South Park uncut and uncensored. However, we only had access to the censored version of this particular episode. Our choices were to either air it as it was, or not to air it at all. Ultimately, we came to the conclusion that not airing it would constitute even more censorship, and that it was best to broadcast the episode as it was delivered to us so that our viewers could make their own conclusions.

That said, we'd still really like to know what Kyle said.

While I admire their sincerity, why can't they even post the bleeped version online? I can understand why Comedy Central doesn't, because they're pathetic, but what reason does the comedy network have to not put it online?

That said, why haven't Matt and Trey posted the offending material online? Or at least a script of what Kyle said? Contractual obligations?

The whole situation is screwy.

Maybe someone with too much free time can piece it together based on the movements of Kyle's mouth.

I did end up finding a way to watch it all the same, lets just say a "friend" had it "video taped" on "VHS" ... yeah. that'll do. It had an amusing reference to the seminal Batman story "The Killing Joke".

Anyways, you can't blame Canada for this one.
From the deranged mind of reedsolomon.matr1x at gmail.com at 8:55 p.m.