I love Winnipeg Transit. It is the best public transit service in the city of Winnipeg, and it services my needs marvelously.

I'll wait a minute for you to pick yourself up off the floor from your fit of hysterics. There, composed? Alright. Now obviously, no Winnipeger could read the above sentence with a straight face. Winnipeg Transit is a joke.

I have taken transit for 5 years now. Usually I take the 18 or 32 buses. Not once in those 5 years have I noticed an improvement in service to those routes. I have seen 3 or 4 rate hikes, maybe even 5. But no improvement in service. I suppose they must have added extra 32 buses during peak time, as you can only fit so many sardines in a can.

Unless you count diamond lanes on Main Street an improvement in service. I don't, because as a transit rider I don't see enough bus traffic past redwood avenue to justify it. They have put diamond lanes on Main Street. Supposedly to increase the flow of bus traffic. Bus traffic is already slow by the time it gets to Main street. The bus drivers already use main street as a way to catch up on their lost time. Of course, if we had a bus system that used feeder routes, this wouldn't be as big of a problem.

There are 3 bus routes on Main street. In order of frequency, you have the Jefferson, which goes to Garden City shopping Centre, You have the Riverbend, which goes to Riverbend, and the Leila, which runs once per hour until 8 pm. The Leila goes to Wal-Mart. Wal-Mart is open 24 hours. They have not added any Leila buses since then, even though there must logically be people who want to shop at Wal-Mart who take the bus.

Now during peak hours, if you want to get to Riverbend or Leila, but stop off at the Extra Foods or Safeway on Main Street to pick something up, you're out of luck, as you can ONLY take the 32 express buses during that time. In which case you have to take the 18, get off, take another 18, get off at Jefferson, then get the 32. I mean, would it kill them to operate some 18's that don't go down Jefferson? Even one per hour? I don't do transit planning though. I don't posess a set of darts.

Now, if you want to get to Riverbend after 7PM, and you missed your bus, which, if you're transferring from another bus, you almost CERTAINLY WILL, you will wait anywhere from half an hour to an hour for the next bus. If you do this daily 5 times a week, you will miss 2 and a half hours. This you will spend waiting for the bus, often in the bitter cold. Unless my math is wrong, and It could be, I'm not a transit planner with a degree in advanced KNOWING HOW TO SCHEDULE A BUS, if you multiply this by 52 weeks in a year, you will have spent 5 days out of 365 waiting for a bus to take you home. But thats okay, Winnipeg Transit has you covered the other 360 days of the year.

But I live with this, I live in eternal optimism that the bus routes will improve, but you know what? They aren't. They won't. They never will. Why can't they replace the Riverbend and Leila buses with a feeder bus that services that area? Starts at Jefferson and Main, goes down to Riverbend, crosses the Chief Peguis bridge to pick up anyone from that side, goes back around Riverbend, heads down Leila to Wal-Mart/Garden City/Templeton and back down Leila to Jefferson? There are two points where it intersects with the Jefferson bus in this scenario, Main and Jefferson, and Garden City Shopping Centre! It would also intersect with the 11 and other buses on Henderson. You could take an 11, stop off at the bus loop by the Chief Peguis bridge there, and get to Riverbend lickety split. You could also take an 18 Jefferson and transfer as well. 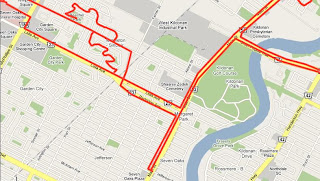 Horrible map for confusion purposes only..

Add a few more Jefferson buses, get rid of the 18 Leila and Riverbend. Maybe keep the 32 for peak times.

And I don't even work for transit. Imagine the ideas someone who does might have. Other than raising fares. And Diamond Lanes. And bus routes that never intersect without a half hour wait.

But hey, at least I have bus service, unlike some areas of the city. Maybe we'll get a shuttle bus from the airport through St James to Polo Park one day. Oh wait, that would require someone intelligent to work at Winnipeg Transit. Nevermind.
From the deranged mind of reedsolomon.matr1x at gmail.com at 10:40 p.m.

I take transit to work most days. When I moved to my current locations there were two routes that went downtown with a more-or-less direct route. A year ago the number of buses on one of those, the express one, got chopped. Six months ago the other route got diverted away to one of those new spralling subdivisions. So now I have only one bus going down town -- the express.

They certainly don't make it easy for people in the suburbs to get downtown by bus. Also, God forbid I stay late at work ... the only bus option to get home comes less than once an hour and goes through a whole different part of the city first.

Bus shelters have changed, but not really improved. We do have priority signals in certain places which are good.

"They certainly don't make it easy for people in the suburbs to get downtown by bus. Also, God forbid I stay late at work ... the only bus option to get home comes less than once an hour..."

That's the exact dilemma I face. After 6:00 p.m. on weekdays, the bus service coming to my area of the city become very slim and sporadic. It's ridiculous.

Either at the end of December last year or beginning of January this year, I was stuck waiting in -40 weather at a bus stop downtown that had *no shelter* for over 40 mins. The 37 bus simply did not arrive and I had to wait for the next (non-super express) bus to come that would be going to my area. That 37 no showed several times throughout the year, and Transit offered no explanation as to why. I no longer take that bus.

I dread anytime I have to transfer buses. Going on Navigo and seeing a transfer where you either have "no wait" or a 1 - 5 mins wait gives me the chills as I'm likely not to catch the transfer. I'm lucky in that I don't have to catch a connecting bus to take me to and from work.