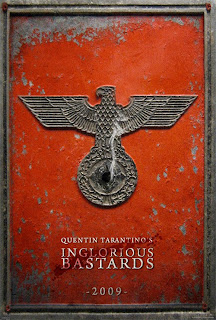 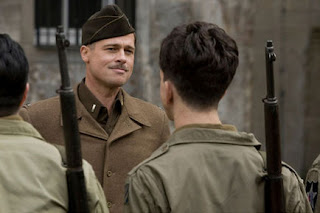 There will be spoilers, but they don't really spoil anything. Except the movie.

Have you ever seen a movie, a historical movie, that takes liberty with history, and makes it much much better? Yes, you have. It was called Gladiator. That movie won at least one academy award. And it fucking deserved it. Inglorious Basterds will win at least 32 Academy Awards. You heard it here first. They will invent new categories. Best Villain (Hitler), Best badass (Brad Pitt's character), coolest Jew. They will create new categories for Oscar because this movie deserves them.

Inglorious Basterds maybe suffers in the same way all artistic Academy Award winning movies suffer, in that its a bit too long. That's not to say the movie is bad at any point, because truly, it isn't, but my butt hurt and I really had to take a piss by the end and that really can ruin the ending of any lesser film. I once had to take a massive crap at the end of the movie Arachnophobia and I never found out what happened with all those stupid ass Spiders. But whatever, Spider killin's easy. Nazi killing.. that's a movie.

Quentin Tarantino can be a good director when he doesn't get obsessed with bullshit women talking about bullshit. When theres violence on the screen, he's your guy. Now, there are parts in this movie where people get scalped or cut up.. I personally hate surgical shit like that because its gross. I don't mind heads getting chopped off or whatever, but for the same reason I can't watch ER, I just don't like those kinds of things. They just bug me on some level no matter how practical or clinical the setting. There weren't TOO many incidents like that, but I'm just bringing it to your attention. But when theres real violence like people getting shot, or shit exploding, its done masterfully akin with the grace of swans attacking a puppy. There was very little bullshit women talking about bullshit in this movie, and it was good. 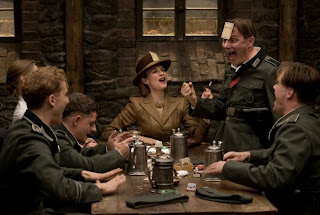 Now, there is a lot of subtitles in this movie, and a lot of readin'. Some folk won't like that. I can't blame them, but it does work to distract you. Myself, I've played enough 80's video games that I don't mind subtitles. Theres enough english in there that you're not reading a novel, but its impressive that the actors and actresses had pretty good accents (and the detection of accents were even written into the plot). I'm assuming most of the actors and such were American, and even so, it was pretty good. Sure people slipped into regular American English at points, but it was pretty subtle when it happened and only a trained professional ear like mine would detect something like that. Were the subtitles there to serve to distract the viewer that this was a wordy Quentin Tarantino movie? I don't think so. It wasn't that wordy. For a Tarantino flick.

There were quite a few cat and mouse scenes which I quite liked. The Nazi's weren't played for laughs as much as I expected. It was pretty serious. The Nazi we focus on at the beginning is a pretty impressive antagonist. Very cerebral and intelligent. You almost get the sense of that cop who was after Jean Val Jean in Les Miserables, he was that type of character. Very well acted, so much so that I can't for the life of me place the actor, he was that deep into the role. Well done, actor, whoever you are. I'm too lazy too look your name up on imdb, but you know how I feel. Sure, Hitler and those characters were played for laughs, but I've seen enough youtube Hitler videos to know that that's probably how he really acted.

Theres one female character who kinda looks like a young Christina Applegate but also doesn't, and she plays a Jew who escapes and runs a movie theatre for some reason. Again, I can't be bothered to learn the names of actors, but she was pretty good. Now, having the setup of the movie to get Hitler, the Basterds, and this women all in the same movie theatre at the end might make you think that Tarantino is just such a Cinemaphile that he needs to somehow make the concept of movies central to the war, but WWII did have a lot of propoganda and use of movies as part of its oeuvre, therefore I will forgive this. It makes sense.

Anyways, in the end the basterds kill Hitler and end World War II. Really, it makes more sense than Hitler commiting suicide or Communists marching into what was later to be known as East Germany. There was some cool gunmanship and out-assholing between the Nazi's and the Basterds.

I saw the movie Munich, and it had a similar premise, but Basterds does it better and is probably truer to real life than Munich was. Now, I'm not a Steven Spielberg fan. He goes for the heart strings a little too often and I don't have a heart, but I understand what he tries to do. This deserves all the Academy Awards Munich thought it deserved.

I'm sure I'm forgetting something. But my brain has been melted by the awesomeness that is this movie. Oh right, I saw the trailer for Avatar. That's gonna be an interesting movie. It looks like they get their minds transferred into the bodies of aliens for some reason and then they run around fucking and riding dinosaurs in 3D. James Cameron is a fucking genius. Also they had the new Trailer Park Boys movie trailer (at least here in Canada) and that also looks like fucking genius. And there was another trailer I liked where this guy is a badass and his daughter gets killed and the killer walks free so he fucking kills everyone who was a part of that bullshit, and that was a good trailer too. There was also a shitty trailer for A christmas Carol in 3D with Jim Carrey. Jesus Christ that was bullshit. I'm not paying to see that fucking crap. What the fuck, Robert Zemeckis?! What the fuck! But I digress, the trailers added a bit too much time to the overall length of the film. While most were good, they should have cut the Scrooge one.

So in summary, I do recommend people see this. You don't have to go to the theatre, its probably best to have it on a DVD where you can pause and appreciate it more, but all the same, it was a good film. Tarantino is back on his game. Bravo. Also Mike Meyers was in this shit and he didn't totally ruin it, so that oughta count for something too.

32 Academy awards.
From the deranged mind of reedsolomon.matr1x at gmail.com at 2:00 a.m.