The One True Keyboard

If you know anything about keyboards, you should know the IBM "Model M" is the pinnacle of Keyboard technology. I first experienced them typing up essays in high school on old PS/2 IBM's. I believe they were Model M2's which are somewhat smaller and more compact, but I was able to bang out essays of unsuspicious quality about 40 minutes before class. Good times. The secret is the buckling spring technology, which makes for a noisy yet satisfyingly responsive typewriter like experience.

Since then, I have acquired both the beige Model M (Which came with an AT connector), and the Model M2, which came with a PS/2 connector. The M2 has a flaw where the capacitor needs to be replaced, but it's a simple enough fix. In any case, I was not without a Model M keyboard.. though my Thinkpad laptop keyboard is certainly a passable one. Imagine my surprise when, for $1, I found a Black Model-M13 keyboard. 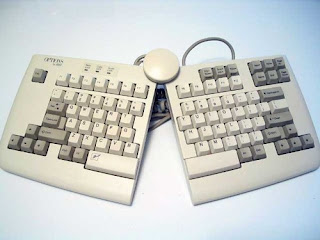 Though not quite the holy grail of Model M keyboards (That would be the Model M15 ergonomic adjustable keyboard pictured above), The Model M13 is the only Model M keyboard that came in Stealth Black (including the keys), and it even has a red trackpoint. Sometimes known as a nipple mouse. As a thinkpad owner, and owner of a standard trackpoint IV keyboard, I knew I wanted it. I didn't even know for sure if it worked. Though, being a Model M, the odds of it not working were minimal. These things are tanks. 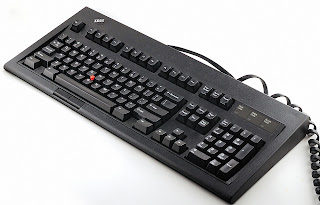 I wiped it down a bit to clean it off, plugged it in via the PS2 ports on my server computer, and lo and behold, it worked. I went online, and imagine my shock to find that these keyboards generally sell (USED) for $250.

I did some more research, and UNICOMP still makes Model M keyboards. They even do custom work and have a $100 version that comes with a trackpoint. That's pretty cool. I mean, I paid $1, but I could have paid $250. But $100? That's a decent price for a good keyboard.

However, looking at it, I realized they're missing out on an opportunity. First, UNICOMP doesn't sell black keys with lettering on them. Even their black keyboards come with white keys. Supposedly people complained that the letters were somehow wearing off. So they stopped selling them completely and only offer completely black blank keys. This I find curious. Dell makes nothing but black shity keyboards. Their lettering doesn't seem to fade. Or if it does, who cares?

Second, while they have a Trackpoint option, exactly like the M13 I got for a buck, It might be a good idea for them to update to three buttons as most modern thinkpad laptops do. I made a mock-up below. Basically I cut and pasted the three mouse buttons from a thinkpad trackpoint on top of the two from the UNICOMP keyboard.. Nowadays the middle mouse button is indispensable for scrolling down web pages or what have you. Also middle button pasting.

Third, If they did offer lettering on their black keys, I'd love the option of a Linux penguin instead of the Windows logo on the meta key. Heck there are even apple fans of the Model M style keyboards, so give them their meta key or an apple or something.

Anyways, if I were designing the successor to the M13, those are the three main things I'd do. Obviously I prefer black, but others prefer white or clear. Beige is kind of passe .. though it could make a retro comeback. Most store bought non Apple monitors are generally (and perhaps annoyingly) black, and people like to have things that match. Also I'd use blue trackpoint caps.

UNICOMP seems to offer a quieter option of keyboard. I have no idea what that means. Is it a clicky keyboard without the noisy click? That seems interesting to me.
From the deranged mind of reedsolomon.matr1x at gmail.com at 11:18 p.m.