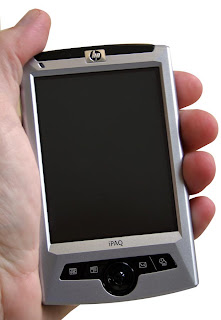 I went to Office Depot the other day because they had a decent price on an HDMI cable, which I purchased. So while I was at Office Depot, I found they had a table set up for discounted items, and they had an HP Ipaq 1700 on the table for $39.99. Which, is a pretty decent price, even despite the fact that it came with no boxes, charging cables, manuals, or anything except the device itself, which was missing a stylus and whether it worked was questionable. I then purchased a retractable cable for $9.99 elsewhere for the thing and tried to charge it. It seemed dead, until I tried a few soft resets, and eventually the screen lit up but it was stuck frozen at the boot screen. Which, while annoying, gave me hope that I could get it to work, and so I searched the internets for the technique to perform a "Hard Reset" on this thing. Which I tried, and the first time it didn't work, but the second time, success! Now I have an extra Pocket PC PDA. While my other one does Bluetooth, Wi-Fi, and much more, this one can at least play mp3's and read ebooks, so $50 total for an ebook reader/mp3 player/calculator/solitaire playing device isn't that bad a deal I think. Basically, its rare to have a decent shopping find, but when you do, yay! Also the guy behind me in line at office depot saw the price when I bought it and seemed to be silently cursing me for finding it before him. It was a display model, and it had some sticky stuff on the back, but I managed to remove it and clean it and its good as new. What to do with it though, I'm uncertain. Basically I'm just gloating to the internets about my good luck. It could happen to anybody!
From the deranged mind of reedsolomon.matr1x at gmail.com at 12:28 a.m.